Climate change is one of the defining issues of our time and one that ultimately affects everyone on the planet. To date, the efforts of scientists, engineers, and governments have been concentrated on three areas: understanding the climate and how human behavior influences it; mitigation of global warming by reducing carbon emissions; and adapting to the effects of climate change. Increasingly, scientists are warning that concentrations of greenhouse gases in the atmosphere continue to rise and are approaching dangerous tipping points beyond which serious and irreversible damage to the environment will occur. This has led some to propose a fourth strand in our fight against catastrophic climate change: geo-engineering.

The Dangers of Climate Change

The scientific evidence is quite clear that climate change poses substantial and various dangers to humans, non-human animals, and the environment at large. While some areas of the earth will benefit from increased average temperatures, others will suffer. Some of the most likely effects, many of which are already occurring, include:

While attempts to reduce on-going carbon emissions are one way of reducing the effects of climate change, it is now widely agreed that they will be insufficient on their own. To reach the goals of greenhouse gas concentration and average global temperature rise identified by scientists as necessary to limit the greatest threats of climate change, more will be needed.

Beyond Mitigation: The Case of Geo-Engineering

Geo-engineering is a loosely defined term relating to any engineering that is concerned with large-scale alterations to the earth or its atmosphere. In the context of climate change, the focus is on interventions aimed at directly or indirectly changing the earth’s climate. Various interventions have been proposed, broadly falling into two categories: indirect carbon sequestration and reducing solar insulation. The first approach aims to reduce the levels of greenhouse gases in the atmosphere while the second approach aims to reduce the amount of solar energy that enters the earth’s atmosphere, thereby reducing the amount of energy available for existing greenhouse gases to trap in the earth’s atmosphere.

While there are multiple specific proposals falling into these two categories, we can focus on one for each:

Some have proposed fertilizing certain regions of the upper ocean with iron (or other materials) to promote the growth of phytoplankton blooms. Phytoplankton absorb a significant amount of carbon dioxide from their surroundings as they grow. Once they die, their carbonate skeletons sink to the seabed and thereby sequester large amounts of carbon from the atmosphere. Multiple trials of this approach have already been carried out, with varying results. 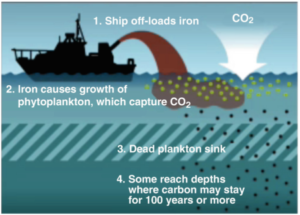 Earth’s history includes a number of major volcanic eruptions. When volcanos erupt, such as Mount Pinatubo’s eruption in 1991, they release large amounts of aerosol into the stratosphere. These aerosols have a shading effect that cools the planet by reducing the amount of the sun’s energy that enters the earth’s lower atmosphere. When Mount Pinatubo erupted in the Philippines, it caused the average global temperature to drop by about 0.6 degrees Celsius in the following 15 months.

Some scientists have proposed mimicking this process by injecting calcium carbonate particles into the stratosphere. A trial was scheduled for 2019 but delayed due to the COVID-19 pandemic and public outcry, and is now delayed until at least 2022. 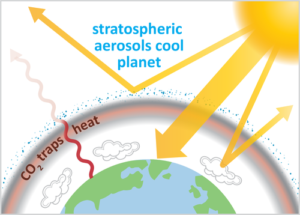 Climate change clearly presents many substantial risks to people, animals, and the environment at large. Thus, actions aimed at reducing climate change are important. But many question whether geo-engineering is the path forward, pointing out the substantial degree of ignorance and uncertainty surrounding the proposals.

Some note that geo-engineering will not wholly solve the issue. Although proponents do not typically claim it will, some argue that by focusing on geo-engineering we fall into the common trap of “techno-fixes” whereby we assume technology will solve the problem and so forgo other interventions. Additionally, some of the specific proposals – such as reducing solar insulation – are not intended to reduce existing greenhouse gas emissions whatsoever, and so some of the issues associated directly with the concentration of greenhouse gasses – namely ocean acidification – will remain untouched.

Additionally, geo-engineering strategies will generally require on-going action to maintain the purported solution. If money or political will ran out, and the process ended, total solar energy would increase and/or emissions would rise again. This could potentially happen at a faster rate than current climate change, thus making it even more difficult to adapt.

Moreover, even if these interventions modified the earth’s climate in desired ways, it would likely have negative impacts on certain regions. Just as climate change is beneficial to some regions now, countering climate change may result in changing of storm and precipitation patterns, resulting in the same sorts of floods, draughts, and heat waves attributable to climate change, albeit in different areas.

Ocean fertilization raises concerns over the health of the oceans. Stimulating phytoplankton and algae growth could result in toxic blooms, a problem already seen in various water ways (such as the Gulf of Mexico) due to agricultural run-off. Such blooms are harmful to other life, often creating oxygen-less “dead zones” where nearly nothing can live.

Finally, the very fact that geo-engineering can be done unilaterally – perhaps by the United States without the input of other nations – presents social and political concerns. Why should a single country (or even small set of countries) get to decide whether to directly and intentionally modify the earth’s climate? Would those actors owe compensation to countries that are negatively affected by the intervention? Would countries attempt to weaponize the techniques to extort or otherwise conduct economic warfare? Raising these sorts of questions points to the dark side of “going it alone”, even as attempts to get collective action moving thus far have been unsuccessful.

This case study was developed, in part, from the following sources

The Primacy of the Public by Marcus Schultz-Bergin is licensed under a Creative Commons Attribution-NonCommercial 4.0 International License, except where otherwise noted.