Skip to content
This chapter will provide an overview of the study of Chinese calligraphy; it will feature the early history, evolution, and formation of Chinese characters; and it will show case proper posture for sitting and standing and, finally, brush-holding techniques.

Calligraphy is much, much more than literally applying brush strokes to paper. It’s an infinitely rich form of art that is thousands of years old, with practitioners who, over the centuries, have blended style and form to enrich China’s history and culture. In its multiple forms of artistic nuance, calligraphy truly is the gateway to China’s “soul.” Without an awareness of what calligraphy represents, one’s appreciation of China will never be realized fully.

Chinese Calligraphy is known as “the correct way of writing Chinese characters” (and it also refers to the completed piece of calligraphy writing). It came into being before the invention of paper and ink, with etchings known as “oracle bones,” that appeared as divine representations on turtle shells and animal bones. As calligraphy evolved, it began to reflect distinctive characteristics of China’s dynasties from as early as 1500 BC. As a result, calligraphy is considered in Asian societies the supreme visual art form, even more valued than painting and sculpture, and is ranked alongside poetry as the highest form of self-expression. Amid rapid-fire change in China and elsewhere, its beauty and self-expression resonate among practitioners. It anchors the present to the past.

Calligraphy as an art form has another feature: It reflects the calligrapher’s own personality, regardless of age or nationality. Practitioners live across Asia and elsewhere around the world. Keen observers, for example, can follow patterns of characters to discern whether the writer was having a good or bad day.

Requiring day-in day-out discipline to master, calligraphy provides enormous aesthetic and emotional benefits to a practitioner. In this digital age of smartphones, laptops and apps, it conveys traditional values through the delicate application of brush to paper. It creates a contemplative, relaxed mood – essential for emotional balance and well-being.

From a study of Chinese history, we know that six patterns, or styles, form the basis of all characters. One authority, cited in Shuowen (说文/説文/shuō wén), a Han Dynasty dictionary (206 BC-220 AD) mentions the following:

Indicative stroke added to the lower part of

(木, tree) for the modern character

(刀, knife) for the modern character

(Regular writing: 明) is combined with the sun (

These are character forms that have been created by borrowing characters with a certain meaning or pronunciation. These forms do not follow one particular character-creation pattern. They are few in number.

Four types of Chinese characters can be created with meaningful components:

As mentioned, rudimentary script discovered on animal bones or turtle shells, known oracle bone script (甲骨文/jiǎ gŭ wén), is the earliest known form of Chinese writing. It is these inscriptions that were recorded during the last nine kings of the Shang Dynasty (商/shāng).

This seal script (篆书/篆書/zhuàn shū) dates to the latter half of the 1st millennium BC. Having evolved from a Zhou Dynasty (周 zhōu) variant, it became the standard formal of writing during the Qin Dynasty (秦 qín). In the subsequent Han Dynasty (汉/漢 hàn), it was widely used for engravings and seals, also known as “chops.”

Qin system scripts, found on bronze inscriptions dating to roughly 770 to 250 BC, begin to have a consistent, vertically elongated shape. Scholars believe that during this period script-writing became the national standard. It’s a finding the discovery of a wordbook with some 3,300 Chinese characters affirms. Also, this small script is considered the basis for what is known as clerical script.

Even now there is a debate when clerical script, commonly known as “official,” “draft,” or “scribal” script, 隶书/隸書/lì shū, came into being. Some believe that it developed during the Han. But others, based on recent archaeological discoveries, contend that it was in use well before then.

What’s interesting is that even though some early clerical script is difficult to decipher, some later versions can be mastered. And then there are modernized versions: These examples have late Han character traces and are used for dramatic stylistic impact.

Modern handwriting reflects semi-cursive, or “running” script, 行书/行書/xíngshū, in that strokes and, in rare instances, characters “run into” each other.

Cursive, or “sloppy script”, 草书/草書/căoshū, is a fully or mostly cursive script. To write in this style, a calligrapher does not often lift the brush from a writing surface and, to enhance appearance, modifies and eliminates strokes.

Regular, or “standard,” script “kǎishū” 楷书/楷書/kǎishū, came into use toward the end of the Han and the maturing of the Tang Dynasty. It got its name because each stroke is distinctive. Because of its easy-to-recognize characteristics, beginners study regular script first.

When standing, place the un-writing hand on the table to support the the body; the upper body should slightly tilt toward the table.

Methods, in general, depend on a practitioner’s ability to control the brush (when writing) and the size of a character.

4.1 Basic Strokes in the Chinese Language

There are 32 types of strokes in regular Chinese character-writing. See Table 2. 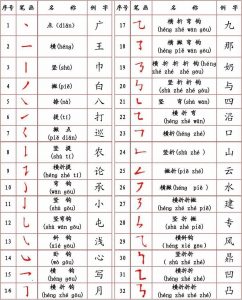 Note: The example characters given in Table 2 are the simplified versions even if they have traditional forms.

In Chinese calligraphy (in regular style, by default) there are multiple ways to write each stroke normally based on where the strokes appear in a character. The horizontal stroke can be written in at least two ways, for example. And the dot stroke may show more forms in places of a character. Below, see basic calligraphic strokes written by Yunzhang Tian (Table 3).

There are multiple ways of writing a horizontal stroke based on its real shape in a character. The basic way of writing its common shape is to take three consecutive steps.

Note: The brush does not leave the paper until the end of the whole stroke.

See the three steps reflected on the stroke below (Figure 2):

The basic way of writing the 垂露竖/垂露竪 is to take three consecutive steps (Figure 4).

Figure 4: Three Steps to Write A 垂露竪/垂露竪 Stroke with A Real Sample Stroke

The basic way of writing the 悬针竖/悬針竪 is also to take three consecutive steps (Figure 5).

Figure 5: Three Steps for Writing a 悬针竖/悬針竪 Stroke with a Real Sample Stroke

An instructor should guide anyone working on this section.

Arch Chinese lists 12 rules of Chinese character-writing order (Note: the numbering/order of rules is different from the original on the website). Below are Rules 1-4:

For details, visit the Arch Chinese website. Yellowbridge Online Dictionary can provide additional information. Please note that the actual stoke order in calligraphy is sometimes different from that in regular writing. And the rules only give general guidance. We cannot count on rules to tell the stroke order for all specific characters. Refer to dictionaries when needed.

Model characters to learn, with character/Pinyin/Meaning below:

Prepare tools and materials. Follow instructions and start to write. Frequently check to make sure posture is correct.

Chinese Calligraphy and Culture 中國書法與文化 by Huiwen Li is licensed under a Creative Commons Attribution-NonCommercial-NoDerivatives 4.0 International License, except where otherwise noted.