The Bamana are one of a number of Mande peoples (much as the French, Italian, Portuguese, Spanish and Rumanians are Latinate peoples) who live in West Africa. They were once part of the Greater-Mande Mali Empire (13th-17th century), and had their own kingdom of Ségou (1712-1861). The French ruled Mali as one of their West African colonies from the late 19th century until 1960, and the Bamana city of Bamako is the country’s capital. Consisting of about 2,700,000 people, the Bamana resisted Islam for centuries, but conversion became increasingly common in the 1950s. Like other Mande peoples, the Bamana have castes–occupational/social places that are birth-related, and marriage usually takes place within the caste. The nobility consists of farmers, while other castes include the bards/griots (singers, dancers, historians) and the blacksmiths (metalworkers, potters, ritual specialists, wood sculptures). Multiple initiation societies called ton once exercised social control with associated masquerades; many of these are now defunct, replaced by other kinds of male social groups. For more information, see Christopher Roy’s Art and Life in Africa University of Iowa website. 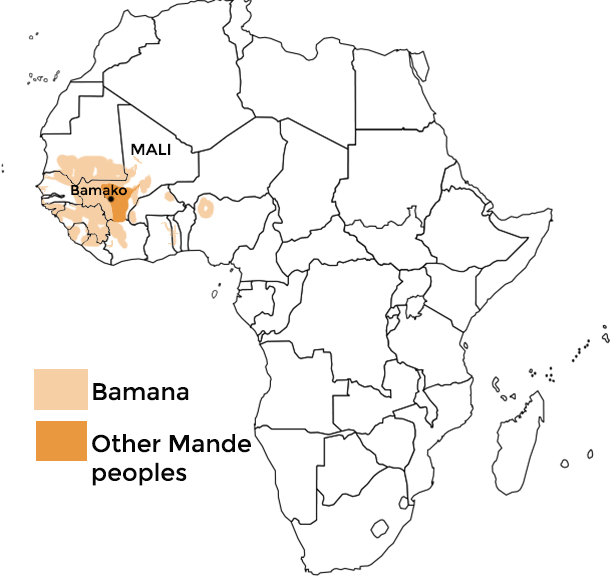 The Bright Continent: African Art History by Kathy Curnow is licensed under a Creative Commons Attribution-NonCommercial-ShareAlike 4.0 International License, except where otherwise noted.