Before we begin a detailed examination of ancient Greek religion, it is wise first to consider the general history of ancient Greece and the culture that gave rise to the Greeks’ rich polytheistic religion. In order to understand elements of Greek religion, such as animal sacrifice, prophecy, curse tablets, athletic competition, drama, and mythology, it is essential to be able to put these elements in their appropriate geographical, chronological, and ethnic contexts. For example, while many people have a general knowledge of Greek mythology, not everyone realizes that mythology was a part of Greek religion. Although myth is often considered to be a separate genre that can be studied and enjoyed on its own merits, when removed from its natural context, we miss much of its relationship to Greek culture, history, and religious practice. In essence, myth would not exist in the absence of religious thought, since it centers upon the gods and their relationship with humans and the natural world. The same might be said of Greek tragedy, which was in fact performed as part of religious worship (usually of Dionysos). 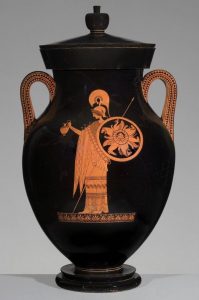 The first chapter will provide some context to the ancient Greeks, their history, and their culture. You should keep two important things in mind as you read through the material: 1) Although the Greeks shared a language and many cultural practices, they were never a politically united people and, as a result, each city-state developed variations of myths that tended to emphasize different gods and heroes. In short, there was no Greek nation in the ancient world; there was not even a concept of nation as we know it today. 2) The vast majority of the preserved material was produced by the Athenians. This means that we tend to have an Atheno-centric view of ancient Greece, while we know comparatively little about the thoughts of other Greeks, such as the Spartans (most of the literary evidence for Spartan society was written by Athenians). For example, many people think that ancient Greece was a democracy; in reality, democracy was invented by the Athenians, while other city-states developed their own political systems that were often quite different (e.g. Sparta had mixture of duarchy and oligarchy). Due to the limited nature of the extant evidence, we must necessarily focus largely upon Athens, however, this course will also strive to include the works of non-Athenian writers (e.g. Homer, Hesiod, Herodotus, and Aristotle), and archaeological and epigraphic evidence from other Greek city-states.

Tasks: Complete the readings, below, then go to the Blackboard course page and take the Module Test.

NB: This chapter includes the links to the readings (see below). When you click the links, you may have to log in with your CSU library ID and password. PDF copies of all of the readings are available in the One Drive folder (see the left-hand menu of the course Blackboard page for the link to One Drive).