When including parenthetical citations, be sure to place a comma between information and place a period after the parenthesis.

If there is an author, then place the author’s last name and year of publication inside:

If there is no author, then place the source title (with quotation marks and title caps) and the year inside:

When citing two or more authors in a parenthetical citation, use an ampersand (&) in place of the word “and.”

When citing two authors, include both of their names in each citation.

When citing three or more authors, use the first author’s last name and “et al.”

If you’re directly quoting, then include page numbers

Paraphrased information does not require the use of page numbers

Use semi colons to demonstrate the use of multiple authors. This is especially useful when many authors have similar arguments or have found similar results.

Using signal phrases to cite information means that you add the citation to your sentence(s). This also means that you do not need an additional parenthetical citation.

Insert the author’s name and year into your sentence to act as a signal phrase.

Do not use an ampersand (&) in signal phrases; instead, use the word “and.” 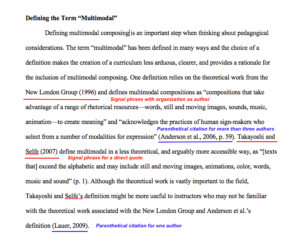 A Guide to Rhetoric, Genre, and Success in First-Year Writing by Melanie Gagich is licensed under a Creative Commons Attribution-NonCommercial-ShareAlike 4.0 International License, except where otherwise noted.