The game of Dungeons & Dragons was honestly something that I did not see myself being interested in ever until I tried it out for myself. I always thought it would be boring since I would not be able to watch a screen like a video game. Somehow, my dad convinced me to sit down and play a game with the rest of my family and after going through the process of creating my character and learning about the game, I was pleasantly surprised. I did not realize how much fun it would be and the amount of energy and imagination that went into the game. Dungeons & Dragons is a role-playing game that takes place in a fantasy style universe. The basic idea behind the game is that players go on a quest made by the Dungeon Master, who is the person who runs the games and who everyone listens to. Everybody’s characters have different powers and abilities depending on what class or race you choose within the universe. Along the way, you fight different monsters and complete missions to reach the end goal of the story. The literacy involved with playing this game is incredibly significant in how the overall flow of it is and in reality, how interesting and fun it is. The components of the game which include understanding the story, creating a character, using the handbook, and communicating with the other players and the Dungeon Master are things that can either make or break a group’s adventure.

The most significant out of all those perspectives of literacy is understanding how the game works. There really is a mindset that you must put yourself in to immerse yourself in the world you made. Since there is not a visual representation in front of you like a screen, you must use your imagination to create an atmosphere to invoke emotion for yourself and others that are playing. This tends to make people invest in the game and it brings out everybody’s personalities through their characters and the story. This also applies to the Dungeon Master the most since they are the ones who make the story and feel emotionally connected to it. Every individual who plays the game must invest their time to know the rules and what to do at what times. It requires a lot of strategy and thinking ahead of the game to avoid bad situations.

Since the game requires a lot of attention to detail, there are a lot of items that you need or can be useful to improve the experience. 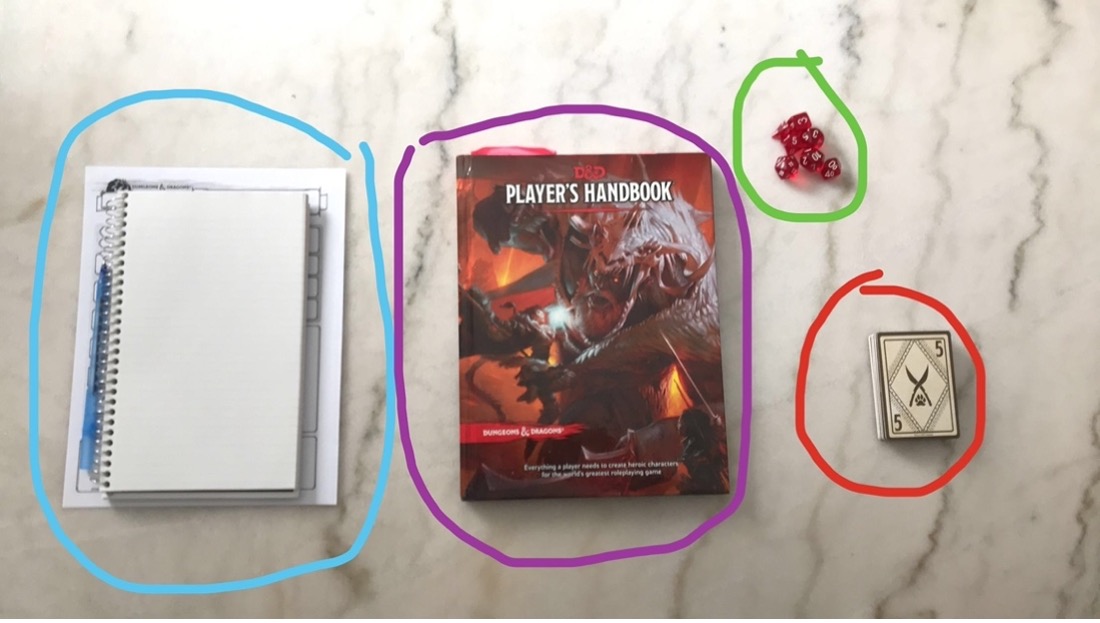 Shown above is a setup that I use when I play the game so that I feel prepared in case of multiple situations that may occur during the game. While these are items that I use to play, it is at the end of the day a person’s preference to how they play this game because it is all about how it is fun for you. There are still items that a player needs in order to actually play. Those include dice which are shown above in the green circle. There are many types of dice that you need for the game and having a complete set is important. The other item that is needed is the handbook which is circled in purple. Players read this book during the game and become familiar with where to find information about spells, rules on leveling up, and any other question they need answered. Along with detailed reading, a significant amount of writing is involved which requires notebooks to record what happens on your adventures so you can reference it later, pens or pencils and other sheets that may include information about spells or your character specifically, shown above in the blue circle to stay organized. Other optional items from my experience are spell cards shown in the red circle or a monster manual if it is available to you. The monster manual is mostly in my experience what the Dungeon Master uses to give a description of the monster that you are facing but if you have it handy for yourself and the rest of your group, it can be helpful to do more research on who you are facing. The important thing that a player should have is the handbook so you can reference certain things at any time and you do not have to keep borrowing another player’s handbook.

Being creative in this game can allow you to have a much more enjoyable experience and doing that when making your character makes it incredibly fun. When you create your character, it allows you to live in the story through your character. The handbook gives in-depth descriptions of what each class and race does, and the player can read and produce any combination they want. It can be as simple as a human fighter, to as random as a halfling barbarian. Players are reading and writing to make their own creations come to life. For example, I created a character that was a human ranger, and I gave him a whole backstory about where he came from and his values and beliefs. Another creative aspect of making a character is having the option to be artistic and draw your character. Drawing your character adds another element to creating an atmosphere and bringing the story to life. Shown below is a character sheet that I use when I play with my family. 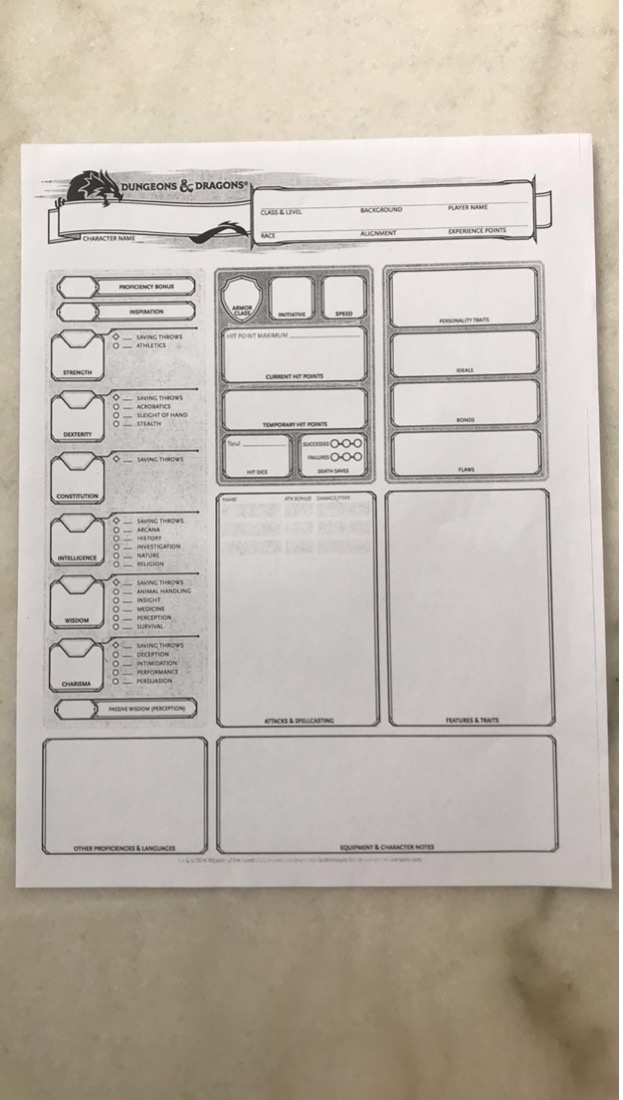 The handbook is what makes not only your character come to life but also the whole game in general. It allows players to immerse themselves on a technical level and study the book to solve different problems that may come up during an adventure. For example, if a player needs a description of what one of their spells does, they then can look in the spell book to understand what the spell is but also what damage it does and it’s other special abilities. The handbook also includes very important information about leveling up your character regarding when and how to do it. This is why reading plays such a huge role in the game itself and allows the individual participating in the game to have an even greater experience.

Reading the book can benefit you for success on your adventure but communication between the group of adventurers is something that is even more significant. Dungeons & Dragons involves a lot more cooperativeness between the players compared to video games and being creative in certain situations is a part of the game. Since the Dungeon Master can make decisions on what adventurers’ encounter, they are able to understand what the dynamic of the group is. They know that one individual may take more of a leadership role, and that another person may tend to be more of a follower. From my experience, it is important that the group communicates with each other and rationally think about a situation they are in. A large amount of the game is critically thinking ahead and making choices to prepare for what comes next. If there is bickering or arguing between the group, then it will be even harder to finish the game and complete missions not only because you will not be making good choices, but you also may waste time in certain situations. This makes proper conversation between the players one of the most important parts of Dungeons & Dragons.

The majority of the game is directed by the Dungeon Master and it shows the creativity that is required by them. It allows them to create something from their own imagination and bring it to life through a story that they make. I personally have not been a Dungeon Master myself, but it seems like something that can be fun and allow me to be creative. It is important that the people who participate in the game that they understand the context of the story and what their end goal is to make their decisions. This encourages everyone to become much more engaged and immersed in the adventure. A story that you can share with friends and family and momentarily experience it together can be something incredibly special.

The game of Dungeons & Dragons involves so much literacy in reading, writing, and communicating. Studying the player’s handbook is a huge part of the game to be successful in completing missions and having a full understanding of how the game works. Becoming familiar with how your character specifically works and using that knowledge to apply it to the game is something that is incredibly significant as well. The game involves so much creativity whether that would be creating your character and making an illustration depicting what your character may look like or the Dungeon Master making the story and bringing to life through the game. The most significant part of the game is communication between the players and problem solving together to reach an end goal. There is a lot that is involved in the game and other than fighting monsters or using spells, it is really what makes it so magical.