As a toddler I always have seen my older cousins play football and it was my favorite thing to watch on TV . Before I was old enough to play, I would try to tackle my cousins when I saw them or play with their Muny League helmet. When I finally reached the age limit to play, I couldn’t resist and had to be the first one to tryouts. Vividly I remember running through the field crying after practice when I thought I had been cut my first year trying out. My heart sunk, chest feeling like it was going to explode, and my stomach dropped. As a 6-year-old child I thought that I wanted to die. I finally got the chance to do something I had been wanting so badly and I was not allowed to play on the team. My grandmother, who was a team mom at the time, decided to play a prank on me with the help of the coaches. I do not think I wanted to see her or talk to her the whole time we were in the car. Do you know how kids tend to fall asleep in the car when they are upset and crying? That was me. I woke up and she is yelling to wake me up to go into Dicks Sporting Goods. Of course, I had no idea what this store was at that age. I felt like I was in paradise when I saw all the gear. Eventually I remembered what happened before the car ride and got sad again. She looked at me, gave me a hug, then smiled and told me that I really did make the team and that it was a joke because she wanted to surprise me. I was so happy, and dancing. I don’t think I stopped smiling for a couple of days. I could not wait to get to my first practice as a real football player. I got to wear a nice team helmet and practice on the same field as my older cousins.

I started to catch on to the rules of football as I watched. My cousins also helped me learn some rules while playing madden and showed me stuff that I can do better at practice when I went. I learned the most from football as I got older from coaches and football camps. In football it’s always more you can learn and more ideas you can build upon from.

Trying to understand a playbook is one of the most difficult things to do when you are just starting football, or the dynamic of the team is changing. Every coach has their own philosophy of what type of team they want to run with  what type of scheme they believe will fit. Defensively a team can be man heavy with nickel base defense. Many people would be confused by this alone. To say nickel to an average person who doesn’t know football would assume a monetary nickel. In football nickel is a defensive formation that includes five defensive backs, two linebackers, and four defensive linemen. In typical base 4-3 defense there are usually four defensive backs, and 3 linebackers. The term nickel comes from the removal of one linebacker who is replaced by a defensive back, hence the formation nickel because of the five defensive backs.

This example below shows a 4-3 defense and a popular play call in the run game that could be used against it. When this play is executed correctly, and everyone takes the correct assignment it is a nice gain every time.  In a 4-3 defense there are four down linemen, 3 linebackers, 2 corners, and 2 safeties. The linebackers are indicated with the letters W, M, and S. In football terms the W is for Will or weak side linebacker, M for Mike or middle linebacker, and S for Sam or strong side linebacker. The defensive front is labeled as E for defensive end, T for tackle, and N for nose tackle. The square on the opposite side represents the center, as the circle next to him represents the right guard, with the right tackle to his right. The same rules apply on the left side of the center. In this play the center and right guard double teams the nose and works up to the Mike linebacker, beating him at the point of attack to open a lane for the running back or full back to escape to, depending on the set in the backfield.  Below the image of the play art there is also a link to thew outcome of the play being run successfully by me and my high school teammates.

They played a 4-3 defense but with a twist. The defense decided to bring down a linebacker so pre-snap me and my teammate, who was lined up at guard had to change our responsibilities to ensure that the play was successful. Instead of performing a hook block to turn my man inside, I had to perform what is called a cut off. Which requires a different step so that the blitzing defender would not come through the whole free. This blitz pick up worked successfully and resulted in a Touchdown on the play. 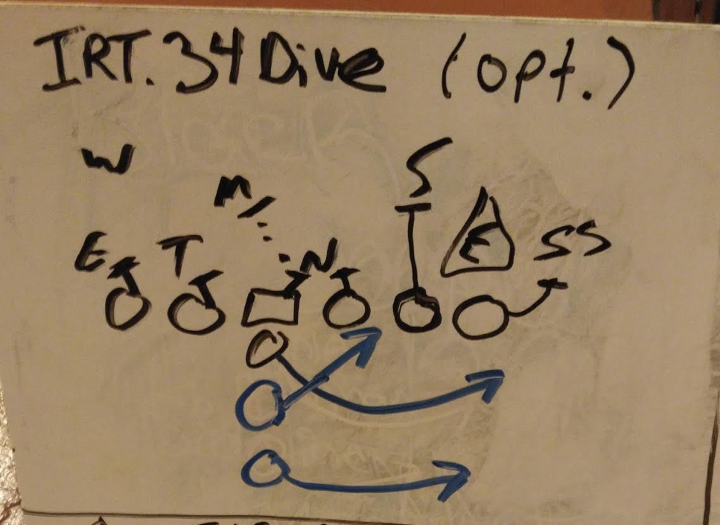 This nickel defense is used to stop the passing game of an opposing offense. There are a variety of other formations as well for different situations. Some variety of coverages for a defense include cover 1, cover 2, cover 3, cover 4, and cover 6. These are some of the minimum basic coverages required by some teams. Messing up and confusing this terminology can cause you to lose a game and lose your position, as happens very frequently. To give team plays on the field coaches will often give hand symbols. After the symbols are received, a player will yell out the play to the other teammates on the field so that everyone understands their responsibility. If you have ever watched football at any level, I’m sure you have seen blown coverage because of the lack of communication skills and comprehension between coaches and players alike.

Something as simple as pressing underneath or playing umbrella coverage can make a dramatic difference based on the type of team you are playing, as well as the ability of your teammates to also be able to interpret what is going on around them.

As you can see, even though football is one of the most exciting sports in the world, it can be difficult and complicated. This is only a glimpse into how rigorous football is with how much literacy is involved with it. You need to be able to comprehend the terminology given to you, as the terminology can build your technique while teaching you discipline. Communication is valuable in screaming to teammates responsibilities in between plays, understanding what is expected from one another. Reading is a big asset, as you need it to comprehend and visualize the play art given to you in a thick playbook. Literacy in football gives players the capacity to put their athleticism into functional knowledge, so they can compete safely in the hopes of defeating their competitor.

Understanding Literacy in Our Lives by Kaylaun Miller is licensed under a Creative Commons Attribution-NonCommercial-NoDerivatives 4.0 International License, except where otherwise noted.