Living in a world with multiple forms of technology and ways to communicate, lots of words and emotions can get interpreted in the wrong way. Nowadays texting is becoming more and more popular, so now it is possible that those who text quite often are uncomfortable or awkward with in-person communication. There are so many reasons as to why texting can affect communication such as that texts only allow for one-word, single sentence thoughts and ideas to be acceptable. Truthfully, how many times can you think of that you sent someone a message like that, and it has come out wrong? Or you get a message from someone and you feel instant irritation or attitude. I think this feeling can be the same for everyone because there is no context or information behind these messages other than the rough words, so without that nonverbal communication, you create your own opinion, feeling, or expectation.

I can say myself that this has happened to me more times than I can count on two hands. With the absence of emotion, gestures, and tone, there are very little cues to help clarify what the other person may be trying to tell us. These little mishaps that may happen more often than not, which could start issues just as arguments or the silent treatment.

In the images below, I have shown the same word but the different ways it can be interpreted over text depending on the context. I showed that whether you are a boy, girl, mom or dad the different ways this word can be interpreted as. Like when texting and using one of the “okay’s” you could be saying “k” because you are in a rush or busy. You could be saying “ok” just because you simply mean ok. The other example of the word whatever, my mom uses that in text ALL OF THE TIME, but she is never mad. When she uses it, it means yes for the most part. I never knew that until I asked her if she was mad at me or not but that is just the way she texts. But my point with all of this is, you have no idea what that other person is doing, feeling, typing, or trying to say without either them texting you a message the length of a book or seeing them in person. 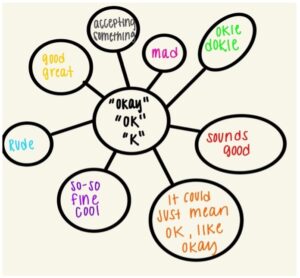 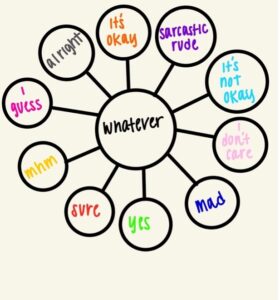 My first ever semester of college was this past fall, and I went through a situation as I explained above that could have been completely avoided if it was in person. I was having trouble taking my test on Blackboard and none of my questions would save. Due to this technical difficulty, I thought it would be best to go to my professor and emailed him letting him know the issues I was having with the exam. He didn’t email me back for a little while, so I simply had assumed he was busy, like most professors are around exam time. Well, when he emailed me back, he had what seemed like an attitude or as if he was frustrated with me because he was responding with one-sentence replies. As a result, I began to get frustrated because my test was graded incorrectly, and he was responding with only a couple word answers and no emotion to me is what it seemed. So, after a long day of emailing back and forth and letting me retake the exam, he had apologized about the previous emails if they sounded negative because they were not. He has said that he was remarkably busy because he was grading two other classes exams in the middle of trying to email me back. This is the major problem we face with texting and email communication because, like I said, this was not the only time this happened to me, it was just the most recent. Without being able to “read the room” or see people’s facial expressions it is almost impossible to know what their actual intentions were with that text. People often get caught up with whatever task they have at hand, so not much attention is paid to their text messages, and therefore weakening their virtual communication with others.

The real meaning of a person’s text is often times lost or misunderstood. Also, having these text message conversations loses value and meaning to face-to-face conversations where you are able to use the tone of your voice to set the mood. Often, the structure of the sentence or punctuation conveys the emotions or feelings of that message. We as teens especially are so adapted to the basic grammar, the slang of text messages, punctuation or abbreviations it often translates into school writing. Personally, I can recall sometimes I have been writing a paper or notes and accidentally written “U” instead of “YOU” or “R” instead of “ARE.” All medias like texting are not always negative and do have some positive aspects to them. People nowadays have come out with ways that you can put more emphasis in a text message. Like the use of emojis, with the different faces they convey and colors, shapes, and people. These little things can change a boring message into a more emotional text. But even with that there are cons because you don’t want to be sending smiley faces and hearts to your professors in an email or your boss in a text. This is why the use of face-to-face interaction is so important to be able to see the body language and emphasis on people’s feelings. As weird as this may be, I feel like animals may have this same thought as us humans when it comes to misinterpretation. If you use a high nice voice when you’re saying something mean they will most likely think you’re being nice. Or if you scream and you’re saying something nice, they might think you’re being mean. It Is all about the perception and how you take things.

Another instance that comes to mind that happened to me was my senior year of high school, I was at home and I had just come back from an appointment and I had to speed get ready for my cheer game for a Friday night football game. Prior to my appointment, I sent my coaches a message saying, “I might be late to the bus because I am coming from an appointment 45 minutes away” and they all said okay that’s perfectly fine. So, I thought I was okay to get ready but obviously speed though. I am about to leave and my coach texts me “Hi Aubrey. You were supposed to be to the bus 5 minutes ago. Where are you?” and I was explaining to her how I let her know earlier that I was going to be late to which she explained she forgot. So, I had said I am on my way and she said, “If you are not here in 10 minutes, we are going to have to leave without you.” I thought she was irritated or mad at me, so I tried my best to get there. Well, when I got there, all the girls were laughing because I didn’t even have my shoes on. The whole time it was a joke, but I couldn’t read the humor through the text and I thought she was actually mad.

In conclusion, assumptions can be a very dangerous thing but a lot of times they are made frequently when texting, emailing and using different types of medias. Communication is a vital tool to be able to understand your peers and the environment around you. Everyone says communication is key to anything whether that be a friendship, a relationship or just talking to people in general. The different ways you can utilize your voice and body when having face-to-face communication will not only convey your message to the other person but give it in a direct way like a text or email. When you are verbally speaking to someone, the words you are using are given meaning, while over text the meaning is often times lost. No, texting and emails will never go away and as the years go on, they will most likely grow more dominant. But it is important to use the verbal skills you were taught no matter if you are having a conversation with mom, dad, sister, friends, or a dog.

Understanding Literacy in Our Lives by Aubrey Richardson is licensed under a Creative Commons Attribution-NonCommercial-NoDerivatives 4.0 International License, except where otherwise noted.