“Mom, Dad, I’m gay.” Moments leading up to that little sentence, I thought I was going to cry, throw up, and literally die all at the same time. My parents are sweet and supportive but that really does not change how difficult it is to say. My mom cried and gave me a hug and told me she loved me no matter what; and my dad was silent for a long time. He hung his head and I waited. He finally looked up at me and said, “Would a Chip-and-Dale change your mind?” He started laughing and then told me he didn’t care as long as I was happy. I explained that, no, a stripper was not going to change my mind and we all had a good laugh. That was probably the best outcome of that conversation that I could have imagined. Then I entered this weird time of “I’ve finally figured it out, now what?” It is frightening to start a new chapter of your life, especially when you do not know much about the community, culture, and history. After learning more and becoming more comfortable, I realized that I needed a dictionary for all of the new LGBTQ+ words that I was expected to know!

A few months after coming out to the important people in my life, I had found websites, YouTube channels, Tiktok accounts, and reached out to LGBTQ+ friends and learned so many new things. However, there were terms and slang and derogatory words that I was having trouble remembering and I did not want to use. I did not want to use the wrong terminology and be offensive or hurtful to someone, but I was expected to know all of the new words regardless of if I used them or not. There are so many websites dedicated to gay and lesbian slang but do not even touch on bisexual, pansexual, asexual, trans, and nonbinary words. Everyone has lots and lots of things to remember.

I remember when I came out to one of my best friends, Ryan, who is a gay drag queen. After congratulating me he said “Welcome to the Alphabet Mafia! What kind of lesbian are you?” I stood there, visibly confused, and answered “Umm, the kind that likes women?” He thought that was the funniest thing he had ever heard and then proceeded to give me my options for what “type” I am. He listed probably 20 different things before I stopped him, and he ended up sending me a website showing all the “categories” instead of trying to explain them all to me. I literally needed a gay dictionary to know what on Earth he was talking about. I knew then that I needed to learn this new language before talking to someone else in the “Alphabet Mafia” (LGBTQ+ community), so I did not look like a fool. Thus, I began my research to become literate in the language of the gays.

I started small with simple words that I knew. Gay: homosexuals (usually men). Lesbians: homosexuals (only women). I had to do more research into why gay could be both men and women, but lesbians are only women. I learned that it stems from many people feeling uncomfortable with the word lesbian, so they use gay or queer instead. Which leads me to the next word, Queer: A reclaimed slur by the LGBTQ+ community, refers to anyone that is either gender non-conforming or attracted to the same sex in any capacity; this includes bisexual and pansexual. At this point I already felt so overwhelmed. I had been learning different terms for only a few minutes and there were already three different things that I could call myself. So, for research purposes, I decided to narrow it down to specifically lesbian terms.

The first result I found was WLW, which means women loving women. I liked that it was inclusive like the word queer. The next three words I found go together like a set and then each break into different sub-categories. The three words are Femme, Butch, and Futch. Femme: A lesbian woman that dresses in feminine clothing and has an overall feminine identity. Butch: A lesbian woman that presents in more of a masculine way through their clothing. And finally, Futch: A combination of Butch and Femme that can be more of an androgenous style. I realized it was all about presentations and what you like. After coming to this conclusion, it was easier to understand all of the different gay-subtypes. For example, Diesel Dyke: A woman who presents more butch and likes to drive fast cars and have sex in them. It is fairly straight forward and to the point.

Then I stumbled across slang and derogatory terms. Let me begin with it is never okay to call someone a f*g or anything that they are not comfortable with for that matter. I even knew that one before figuring out I was gay. The next word has been reappropriated but derives from a homophobic and misogynistic slur and that is dyke. I personally would not like to be called this but from what I have read, it is a term of empowerment and just another word for lesbian or WLW. But to reiterate, if someone has not specifically said that they are okay being called something, never assume. If they refer to themselves as something, check in with them before you refer to them as that same thing. There were many other terms for identity like Chapstick Lesbian: the femme one in a gay relationship, Celesbian: a lesbian celebrity, Baby Dyke: someone who recently came out, 100-Footer: a person you can tell is gay from 100 feet away, and there are many more.

There were also words that are actions that lesbians do. For example, U-Haul: when lesbians move in together after the second date (it’s totally a thing and I don’t know why we do this), and Saysbian: someone who says they are a lesbian but they only date men. Some broad terms that are kind of common knowledge are LGBTQIA+: Lesbian, Gay, Bisexual, Transgender, Queer/Questioning, Intersex, and Asexual/Allies. These do not include gender identity only sexual orientations. I am still to this day learning all of the different things that people can be, and I think it is wonderful, but you really need a dictionary or a guidebook.

Some other things to know are the flags, how to spot a gay in the wild, and what to say to them. I have memorized the flags, but I do not have one of my own. So, I wear the lesbian pride colors in a bracelet. To someone who was not looking for pride colors, my bracelet looks like any old friendship bracelet. However, to someone who was looking for it, it would show them that I am gay! 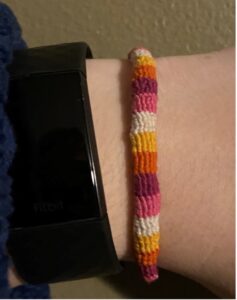 Another thing that I have discovered are the styles of clothing that are indicators of someone being gay. These include cuffing jeans or sleeves, septum piercings, flannels, beanies, crazy earrings, lots of rings, multi-colored painted fingernails, and any sort of pride colors in an outfit. In finding my identity and becoming more comfortable, I have found how much I enjoy being a part of this stereotype of style. Of course, this is to say that not every person who does those things are gay. However, many gay people do and wear these things. In the photo below, I am wearing a pride bracelet, many rings, and multicolored nails (out of frame) and a beanie, crazy earrings, and both my sleeves and jeans were cuffed. These are stereotypical gay accessories.

When you spot a gay in the wild and your gay-dar (gay radar) is going off, there are a few things that you can say to ask them if they are gay without outing them in public. You can say “I really like your style” and see how they respond. If they are wearing pride buttons or have anything that is “known for being gay” like an undercut or eyebrow slit, compliment those specific things when you say you like their style. They will catch on quickly. The final thing to figure out if a girl is gay is to ask, “Do you listen to Girl in Red?” Girl in Red is an musician that sings about lesbian relationships and is very relatable to queer ladies, trans women, and nonbinary folks that are attracted to women. She is a Dykon: a famous lesbian or a straight person that is a strong ally.

I have learned so much since coming out and I am so proud to be a part of the LGBTQ+ community. I am still learning new things every day. It can be scary sometimes to know what is right and wrong to say. Whenever I have had doubts, google or a trusted friend were able to help. I am so thankful for all the support that I have received, and I love that I am finally able to truly be myself. It is nice to get to a point where I am confident and comfortable enough to talk about something that is so important to me. However, when I first started this journey, I wished I had a dictionary or a guidebook that could have helped me when I was lost in terminology because I really needed one.