I have recently started streaming on twitch TV and Facebook gaming. When people hear of streamers that stream video game content, they believe that is all they will be viewing. It is more than just watching a person play a game. The literacy of gaming consists of mainly communication and reading in which helps develop a community for the streamer to interact with the audience. Communication with who I am playing with during the game can help grow the community. There is a streaming language that helps streamers and viewers communicate. For someone like myself bringing content that will keep the audience intrigued not only in gameplay but in the way I interact with the community of my stream. Getting to know the community on a personal level helps build the interactions with the viewers. From my experience, the right content, and positive vibes to build a community through communication and producing great content that engages with viewers can help motivate, cheer people up, and build friendship through Facebook gaming or twitch platforms. The ways literacy and Gaming are connected are streamer interactions from the viewers, the language of streaming, the content that the stream produces, and basic knowledge of streaming.

Speaking in streamer language is how a streamer communicates to the viewers other streamers and Streaming platforms. The language are the words that connect the streamers to their viewers. Here is a list of basic terms every streamer uses and ill go over them: (1) Chat (2) Mods (3) Bits/Stars (4) Clip (5) Bot (6) Emote/Sticker (7) Raid (8) Troll (9) Fraggin’ (10) Ban. The chat is live comments from viewers to streamers; the way streamers communicate to their followers. Mods are assigned by the streamer to watch the chat for spam, using prohibited words, bullying. They are the people that help the streamer in any way. Bits/ Stars are a donation that viewers send the streamer to show their support. Bits are for twitch and stars are for Facebook. Clip is a small 30 to 60 second video that is ‘clipped’ that shows the streamer hitting a crazy shot or something the viewers can look at later. Bot is a term used when a player is moving or acting like a robot during game play. Emote/ Sticker are achieved when you surpass a number of followers that allow supporters to put a emote or sticker in the chat. A raid is when your finished streaming you send your viewers to another streamer. Troll is a person in the chat that is talking about the streamer. Fraggin’ is when you go and kill everyone at a high performance. Ban is when one of the mods do not allow you to enter the stream. Knowing the streaming language will help build content and a community because it is the basic knowledge of streaming. With these terms and many other terms, streamers can communicate with other streamers and audiences.

let us talk about how to start the streaming process and what a streaming platform does. The most important part of streaming is the audio. Video matters but audio is how you communicate with the viewers. The number one rule is audio over video. The software I use to broadcast audio and video to twitch and Facebook is streamlabs open broadcast studio Commonly known as OBS. The OBS software keeps me engaged with the viewers by sending me alerts, changing to different screens such as starting stream countdown, live, or a Be right back screens and keeps a live chat on the screen during the stream. This is where streamer and viewer interactions are happening. From seeing the alerts and chat I can communicate with the viewers. The literacy being used is communication and reading to interact with the stream. 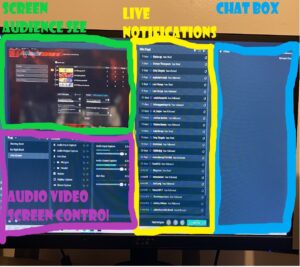 I usually start off my stream with non-copyrighted music provided by Facebook and twitch. The music is seen to draw people in whether than having a blank screen. The streaming platforms help make the viewer feel welcomed with a relaxed slow positive instrumental playing in the background. Then I change to the live screen where all the interactions come alive. Ill start by saying, “coming to you live from the city that rocks”. This engages the audience to start communicating. By saying “how is your day”, “what are you streaming today”, Or during stream “nice kill”. While I am playing, I read off likes, follows, supporter, stars given, and answer comments the chat asks. For example, if someone follows the stream, I will give shout out for instance, “thank you Luis for the follow, how’s your day”. Get a conversation going and try to be personable with every interaction during the stream. For each like, follow, share I get an alert that plays an animation and displays a name on the live screen of the person who likes, follows, or shares for everyone to see during the stream. The stream helps me build a community to keep the interactions personable. I have created a community group for my stream where the viewers that follow can interact with one another.

I use groups to gather people that have the same liking. One site I use is called discords, which I think they obtained the idea from the term discourse. In the group it helps bring together the followers of my stream. Where they can promote their own streaming link, find new players to game with, talk about strategies, send clips of something they did while playing. All these ways from above are how literacy is being used in a life of a streamer. I did not realize how much literacy is going on before, during and after the stream. From knowing the streaming language, to interacting with viewers in the chat from OBS software, communicating with the chat, to forming a group that share common interest and allows them to talk to one another. Communication is the key ingredient to have a successful stream and it is a place where you can be yourself.

Streamers that stream video games give more than just video game content. Its more than a person playing a game because who would watch that. A streamer must engage with the audience with social interactions by reading and answering the viewers questions or comments. By doing this it helps build their stream. By interacting with other streamers and the viewers in the chat keeps a viewer intrigued to get them coming back to watch their stream. When alerts come in, they give thanks to the people who support them by giving them a shout out on the stream. Streamers try to get on a personal level with their audience because its more than a video game. The knowing of the streaming language is something to learn to help communicate with the streamer or any other gamer. Do not be a troll in the chat because one of the mods will ban you and I am bringing content called fraggin’ or dying. Knowing how literacy works in the streaming world helps bring together a community that shares the same interest. All these literacies are the basic knowledge of streaming. Knowing these literacies is how I can always be Coming to you live from a city that rocks.

Understanding Literacy in Our Lives by Coty is licensed under a Creative Commons Attribution-NonCommercial-NoDerivatives 4.0 International License, except where otherwise noted.