Basketball is a sport that can be just as much about communication as it is about teamwork. Communication is a key component used through basketball in order to help the rest of your teammates accomplish the common goal you are all after and that is for your team to win. Communication is not the only thing that goes into creating a winning team. There is also having to learn the different plays of the offense, being able to watch film, and having an understanding of the game.

Communication is especially important when you are playing defense since you have offensive players moving around and setting screens trying to score the basketball. When you are playing you can tell a difference between the successfulness of the team when there is communication and when there are not. Typically, the teams that are willing to talk against the ones that will not talk. On my basketball team this would occasionally happen to us when we would not communicate, and we end up getting hurt by it either giving up a wide open three or a layup. Communication leads to energy being present on the floor and as a player you can feel when there is energy and when it is just dead on your side. The best teams always have high energy and with that energy comes a significant amount of talking. The main area where I noticed playing basketball where communicating was most important is when there are screens being set as if you talk about whether or not you want to switch who you are guarding or you are going to stay. In order to ensure that you do not get confused on if you are switching or staying, the man that is guarding the screener will say either “switch” or “stay” and that lets the guy getting screened know how he should go about defending the screen. By doing this it lowers the chances that there will be miscommunication that leads to the other team getting an easy basket.

The coach and the players have communication through timeouts, practices, and games. Practice is where plays get put in and run, then through timeouts is where the coach will talk to the players about what could use improvement and what the coach is noticing about the game the team needs to do to win the game. In games it was the time when the coach did the least amount of the talk and the players were most responsible for the talk. It was typically our jobs as the players to do the communication for everything except when there were offensive sets that our coach wanted us to run. Other than that, the players needed to communicate with each other.

While most of the communication is done through talking one way that we had done on our team was we had scouting reports on the other team that would talk about the team’s tendencies and some of their plays along with the players. Our coach made up a scouting report and gave it to us either a day before the game or the day of the game and we as players were expected to know the scout at least in terms of players that we could be guarding along with what the other team was going to do offensively and defensively. We learned this information from watching a film on our own along with watching some film together as a team when we would talk about the things we were seeing on the other team. We used Hudl to watch these films of other teams’ games that we would be playing soon along with the film of our own games. On Hudl you could use drawings to help demonstrate what should happen if you made the wrong move and how you could improve that move. There are many things that go on while watching a film and it could include creating clips of things we see or a team’s defensive and offensive sets to help you better prepare for what you may see in the game. In one of our tournament games, we had scouted the team extensively through film and had learned some tendencies of when they would call plays. So, in that game against them I saw them starting to get in formation of a play we knew they liked to run and had learned how to defend so I yelled out what we called it. Immediately everyone knew what play was being run and we were able to defend it successfully and not allow them to run what they wanted to.

Each of us also had playbooks that we got, and our coach had us learn the plays and then we would run them at the practices. So, time was not getting wasted at practice explaining and learning the plays, being able to read the plays out of the playbook was vitally important. Some of the main things you needed to know are the difference between X’s and O’s as those acted as the offensive and defensive players, knowing the symbols like lines that meant the difference between passing and dribbling along with knowing what symbol was used for setting a screen.

In the image below is an example of an out of bounds play that we would run. The X’s represent the offensive players and the solid lines are the paths that you are supposed to run to. When there is a dash at the end of the line it is a signal that you are to set a screen, with your body whatever way the dash is. The dotted lines are there as ways that you would make each pass with there being multiple options on where to make the pass. 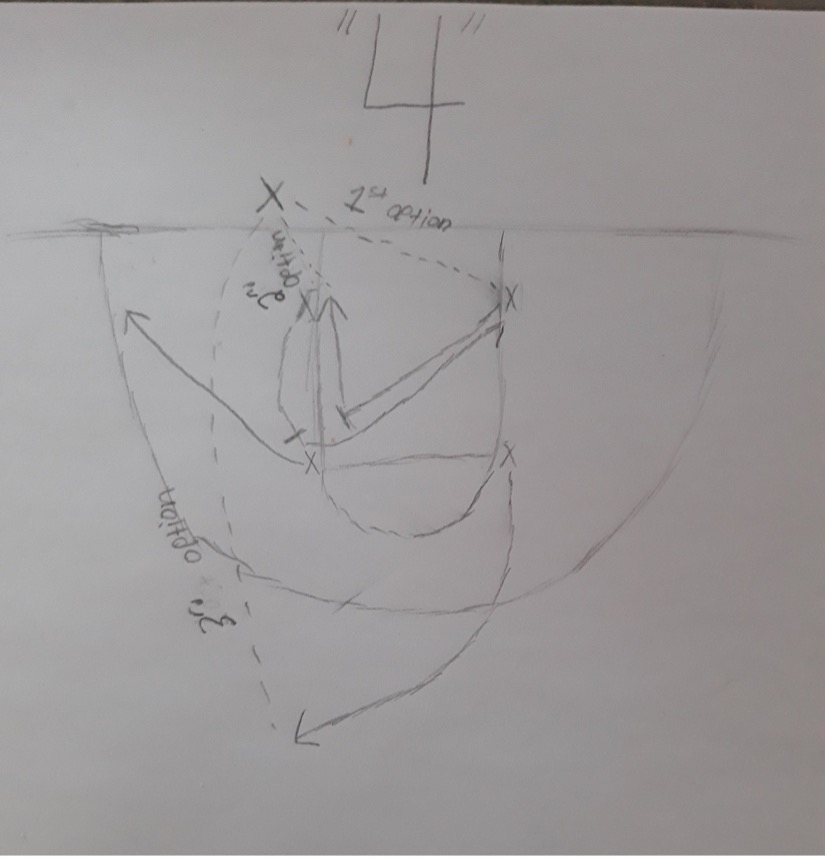 All our out of bounds, defensive, and offensive plays were included within the playbooks so being able to read and communicate these things were important. As there were sometimes with the younger more inexperienced players, they might not understand a play and by you having that knowledge to explain it to them was helpful. These are just some of the things that you would need to know for learning and being able to read plays out of the playbooks.

I was a captain of the team my last year and the role of the captain is to be the one who communicates the most between the coach and the players and being the leader of the team. Another role of being a captain was me calling out the defenses and telling guys where they needed to be, especially if they were not in the right spot. Which meant that I needed to know all the different spots for each defensive or offensive set since the coach was not going to be able to walk them through it in the middle of the game. We had captain’s meetings with our coach and within those meetings we talked about where we felt there could be improvement in the team and how things could be different, that leads to those improvements that we were looking at accomplishing.

Communicating did not always come with verbal and sometimes came in the form of hand signals. An example of a signal used was if one of your teammates was going to set a screen then that person would hold a closed fist in the air that would indicate there was a screen going to be set. Another signal was our coach would hold up five fingers and in doing so it would mean that on offense we were to run five out, which is no one being inside of the three-point arc. These hand signals were important, especially when it became loud within the gymnasium and it became hard to talk and having these signals with everyone, knowing what they meant could only improve your chances.

Communication is very vital within the sport of basketball and without having the talk on the court you are dooming yourself and the team of not being a highly successful team. Even though not all the communication was verbal it is all equally important as if someone can not hear what is being said but can see the signal then that will then allow them to still get the memo of what needs to be done.