Chess is one of the most well-known board games that has been around for over 1,500 years and it is greatly involved with writing, reading, and communication. With chess being around for a long time, its popularity has only increasingly grown throughout its many years and 2020 was a pretty big year for chess. Due to the pandemic and with more people being at home, watching shows on Netflix become very popular. One of the most popular shows to stream on Netflix this past year was The Queen’s Gambit directed by Scott Frank. The premise of the show is about an orphan chess prodigy and the events of her life. This show being such a huge hit led to many people trying out and playing more chess.

I was first introduced to chess when I was around 12 at my cousin’s house for a holiday. We were in the basement and I noticed they had a chess board down there and I asked my cousin if he wanted to play. The only thing I knew about chess prior was that it used the same board as checkers. In reality chess and checkers are very different and chess is very complicated to understand at first. While playing my first game my cousin had to teach me the pieces and rules of the game. He had to communicate with me every time about how every piece could move, their names, and what moves I should be making. We only played one game and I left confused but with a much-improved chess literacy. My next game of chess wouldn’t be until freshman year of high school when we had free time in science class and my friend asked, if I wanted to play a game of online chess. We had talked about chess earlier in the day and I was very interested because it had been a while since I last played, and I have never played online chess before. My friend ended up beating me and I was still confused about the game and its pieces.

With the recent increase of popularity of chess, I decided to do more research into chess. I began to watch streams of people playing chess and they would communicate their moves with the audience. More specifically they would discuss their thought process behind their move and what move they think their opponent would try. Watching these streams, I would pick on terms used by those playing chess. I would later read up on these terms on different articles and see the different scenarios in which the terms are used. Many people might learn chess literacy from YouTube or the many chess websites that offer explanations about the game.

Chess is written about by many people; whose writings act as an analysis or guide for chess. Some authors even analyze the different stages of the game known as chess theory, which deals with the opening, middlegame, and endgame. There is also writing in a professional game of chess because those playing might write down all the moves of the game in order to review later or to keep the current score. Those who are looking to expand their literacy further might even read a book written by a grandmaster, which is the highest title given to a chess player. An example of an of book written by a grandmaster would be “Bullet Chess: One Minute to Mate” by Hikaru Nakamura, who was once the 2nd highest ranked chess player in the world. Most of these books include a diagram of the chess board with the pieces. The pieces are placed relative to the situation or tips the author is trying to provide the reader. With the diagrams includes writing about the idea behind the movements and these movements are also described with the specific squares. These specific squares have the piece’s logo next to it describing where the piece should be moving to or where it should not be moving to. Looking at a few books, I was pretty confused trying follow the pieces movements according to the boards square. I am bit more confident now, but it still gets a bit overwhelming at times trying to follow the exact movements.

When I first started trying to play, I had to learn the basic rules and names of the pieces in order to begin to understand how I was playing. The pieces I only knew the names of were the Pawn, King, and Queen. I first had to begin with remembering the names of each piece and each one of their movements. I learned the names and how to use the Rook, Knight, and Bishop which helped with basic literacy. Pieces are referenced in their position on the board based on where they are located compared to the letters and numbers on the sides of the board. For example, the one of the white rook’s is located on the A1 square at the start of the game. The next step in increasing my chess literacy was learning about openings. Openings help the player start the game off strong and put his pieces in the positions needed in order to make the right moves to win. There are many different openings in chess and all of them have writing behind them as to why each of them would be good for your play style. With knowing this I had an understanding of Chess, a basic literacy and was able to play games without being as confused as I once was.

One of the most important steps for me in trying to become better at chess was finding out about Chess.com. I was introduced to Chess.com when I began checking out streams of people playing chess and that was the website they were using. I liked the websites layout and then I decided to make an account. I was able to play games against people online across the world who were around the same skill level, which really interested me. A feature of the website that I really appreciate is the ability to review your previous game. A computer will provide analysis, communicating what moves you made were wrong and what you should have done. To me Chess.com feels like it’s the center of all things related to writing, reading and communication in chess. The website features articles discussing the latest topics in the world of chess and its famous competitors. Also, it has streams of chess players who are communicating with their audience about their game. Even including discussion boards for its users on specific topics related to chess.

Some of the most useful features to me on Chess.com is its section on openings and its puzzles game. For its openings, it takes a look at the different ways to begin the game and how you should play it accordingly. 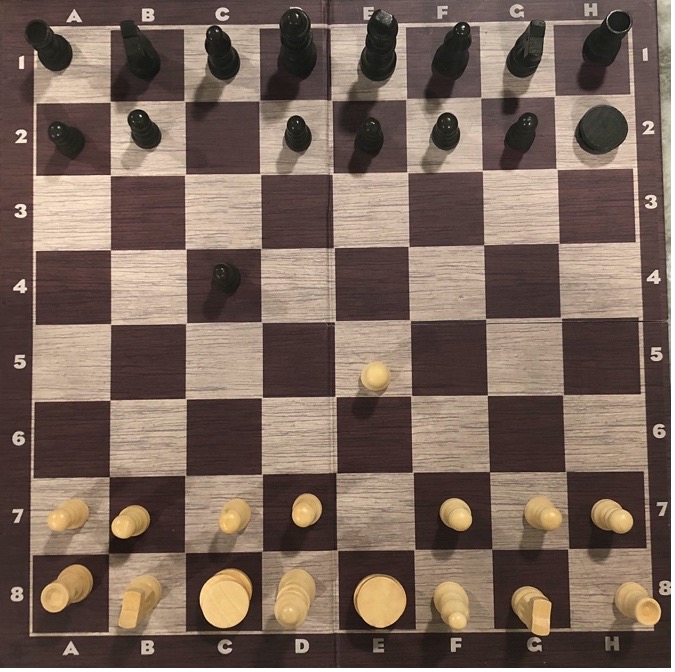 The picture above is showing the opening known as the Sicilian Defense which focuses on black’s response to white moving their pawn to e4(e5 in my picture) as the first move of the game. Black’s response would be moving their pawn c5(c4 in my picture) making it the Sicilian Defense. On Chess.com it shows this but on a virtual board and includes statistics with more resources on the defense, even a comments section for players to discuss the opening.

For puzzles on Chess.com, I would use them to help me with becoming better at decision making while playing. They offer different situation during a game where it’s up to you to make the correct move. The puzzles increase in difficulty the more your skill grows with them. 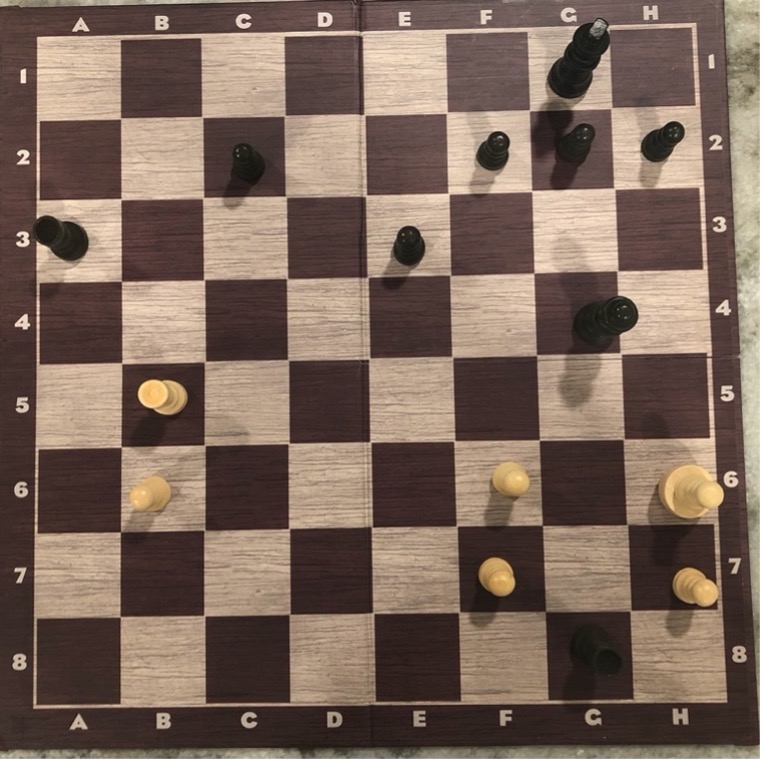 This picture above shows what a beginning of a puzzle could look like but as mentioned before these situations would be presented on a virtual chess board on Chess.com. This puzzle begins with white to move first, with a computer controlling what black’s next move will be. The pictures below show how the puzzle is supposed to be completed with white getting a mate in two moves. 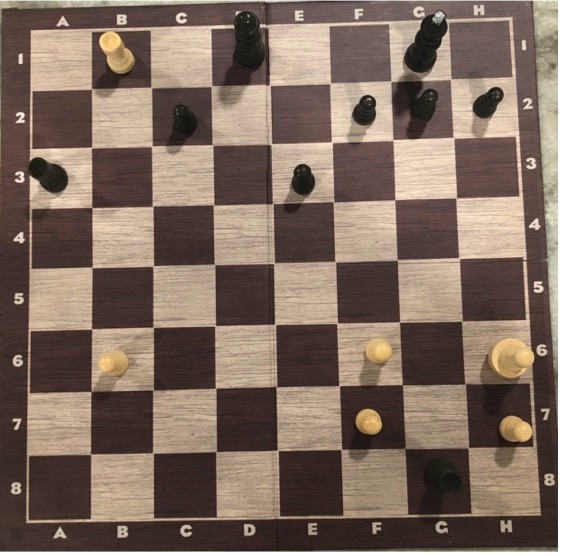 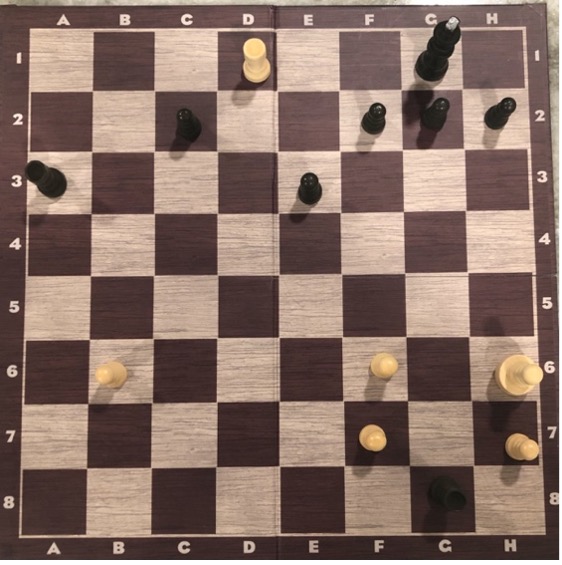 Chess overall has a lot of involvement with writing, reading, and communication. I was able to experience all of these through many different outlets and all were easily accessible to me. I saw communication through chess content creators, and I was able to read the writing of those who were trying to help me improve my game. Whether the writing was in a book or featured on an article online it all helped with increasing my literacy in chess. These all had a huge impact in my personal experience with chess.

Understanding Literacy in Our Lives by Ryan Grady is licensed under a Creative Commons Attribution-NonCommercial-NoDerivatives 4.0 International License, except where otherwise noted.