When I think about an experience in my life regarding literacy, the first thing that comes to mind is learning about grammar and punctuation rules throughout school. After trying to think about the theme “writing about writing” on a deeper level that involved something in everyday life, I began to think about literacy in advertisements and the art and design within them. There is a lot of artwork that goes into creating advertisements and how they are designed. Designers in the real world have to keep in mind how they are going to create an advertisement that causes the viewer to want to buy the product that’s being sold. They have to really focus on the parts of the poster such as the text because they have to make that the strongest part of their design so they can persuade the viewer and give them a visual appeal. Going off of this they have to create something that is going to grab someone’s attention. I can personally relate to the designers because of an experience I had when I was in high school.

In high school I was in an AP Studio Art class. One of the directors from the Cincinnati School of Rock, who was friends with my high school art teacher, was interested in my work and wanted me to design a poster for one of their upcoming performances. I was very excited. The design of the poster had to be 80s themed, so I had to keep in mind that for the lettering of the writing had to be some sort of 80s looking font. I decided to draw the design for the poster and then transferred it onto the computer. When doing this I drew the design on paper with colored pencil and micron pens. Then I used a scanner to scan the picture and put it on the computer, where I changed the coloring, size, and placement of the design. I then had to think about how I was going to incorporate the writing on the poster. I hadn’t realized how many aspects of the writing that had to be taken into consideration when making the poster. I had to think about what type of font to use, the size of the letters, the placement of the information that needed to be on the poster, and of course what the poster needed to say. It was a very lengthy process of trial and error. I hadn’t realized how much literacy was involved in art and design and making something as simple as a poster. Once the design had been finished I had to send it into Cincinnati School of Rock so that they could print off multiple copies to hang up for their show. Seeing the finished product made me feel so accomplished. Surprisingly most of my time making the poster was spent on figuring out little details with the writing on it. This made me realize how much advertisements in the real world had to be made with taking literacy into account. Along with this, visuals on media have to be made by designers that had to go through a similar process as I did. The use of literacy is much more common in everyday life than I realized.

Pictured below is the poster that I created for the performance. The places where the arrows are pointing are some of the most important aspects of the poster shown through literacy. The literacy used grabs the viewers’ attention and is very important when trying to persuade the viewers to go to the show. Without these aspects of the poster that not only communicate by giving information, but they also allow for a visual appeal that makes the public want to see the performance. 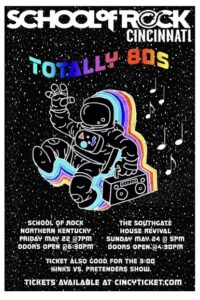 Through this class I had to use writing to portray my art work and express what it meant in my final portfolio as well. After creating each piece of artwork I had to write a paragraph or so to explain how the art connected to my “Sustained Investigation” and what it meant. My “Sustained Investigation” was basically my overall theme to my art work. I had to explore my theme, which was space, and figure out how I could connect my artwork back to it through my writing. I believe everything in life has meaning, which can be expressed through writing. After taking AP Studio Art my perspective on literacy and how it is incorporated into the world definitely broadened. It is now interesting to see how literacy and writing is involved in certain things that I wouldn’t normally think would coexist.

Personally, I don’t usually think about what goes behind the scenes of making an advertisement when I see one. However, after writing about literacy and exploring how it is involved in the communication between businesses and the public I have realized that it exists in almost everything. Along with this because I can relate to the designers that have to design the advertisements with my personal experience I can see how much that I have to think about when making them. Even with the design of commercials and what they say in them uses literacy. There are words incorporated into the visual design and the meaning they are trying to present. Most of the time there are always words within an advertisement because they have to get their point across to whoever is looking at it. Another reason why media literacy is so important is because people can have more knowledge about what an advertisement is trying to sell them. With this knowledge people won’t be taken advantage of by companies that try and sell their product, even if it isn’t actually how it appears in the advertisement. Overall, I have realized that literacy is a big part of the world and how it functions in everyday activities.

Understanding Literacy in Our Lives by Molly is licensed under a Creative Commons Attribution-NonCommercial-NoDerivatives 4.0 International License, except where otherwise noted.