Chapter 3: Literacies across the disciplines

When people think of cinema, they think of the film, not the screenplay used to create it. The average outsider would assume that the production crew creates a film exactly as the screenplay was written. They also assume that book writers have the same writing process as  screenwriters, but that is far from true. I’ve once heard a statement from a very successful screenwriter that says screenplays must be written as if they are a description of a film that’s already been made. This is how a successful script is written. Filmmakers use screenplays as a brief description of story as the basis on which they will create a film in production.

My beginner mistake in screenwriting was that I attempted to use it as an opportunity to  practice my writing chops, writing it foolishly as if it were supposed to be as descriptive as a novel with dialogue lines. In a script, there’s something called the action lines. This is the part of the screenplay where the scene description is explained, such as what the location could look like, how the character acts, encompassing the general idea of what is visually on screen. When I first started writing scripts, I wrote flowery explanations of the scenes. I wrote long descriptions of characters, sets, and actions. As I started learning screenwriting through the internet, I found that the most pressed issue with new writers was exactly this. The truth of the matter is that the script is not supposed to take the job of the casting director, who will choose what the characters should look like, or the set designer, who will create the details in the set, or the director who will plan out blocking (the planned movement of the characters and the camera in a shot done by the director). Lastly, and most importantly, the script shouldn’t include camera direction since that is the job of the cinematographer. What I failed to understand at first is that film is a collection of many people’s artistic visions. Unlike a painter, where they alone create the final product, most films include the work of just a handful of people to an entire army, all putting in their personal creativity into the project. When a screenwriter puts all their say into the script, it leaves nothing for all the other people on set to work with. Even if screenplays did completely direct everyone on set, eventually each individual artist would stray from the script to add their personal flair to the project. The screenplay is only supposed to give as brief of a description as possible. Its job is not to direct, but to give the foundation on which a story can be created. That’s why if you were to read the script of your favorite movie, you’d probably notice how brief the action lines are and how much of the script was changed or even ignored all together.

Dialogue is the one place in a screenplay where the screenwriter is allowed to be specific. There are instances where the director lets their actors improvise based off the script and there are also instances where the director will not let their actors stray a single word from it. Dialogue is a screenwriter’s place to shine. This is where they don’t have to summarize. What makes good dialogue is how close to reality it is. When writing a script, you want your characters to talk like real people. If they were to exist in the real world, they better talk the way you write them. There are many book writers who can write amazingly detailed descriptions of their story, who write so beautifully until it comes to dialogue. They may write beautifully in their stanzas, but their characters end up having no life to them. What makes a good writer of dialogue is the ability to understand human conversation. Understanding communication and how people talk is vital to creating dialogue that just works. Some screenwriters will have co-writers help create a natural conversation by enacting the scene out and seeing what dialogue they come up with naturally. This is an amazing tool for creating living and breathing communication. The reason why good dialogue matters so much is because it’s simply more entertaining. It’s so common to run into cliché scenarios where characters say things that you only hear in movies. Audiences find much more satisfaction in watching the actors on screen have a conversation so realistic that it sucks them into the movie. Good dialogue and great acting create the proper environment for the film to be convincingly powerful. It also creates the perfect environment to win awards.

Let’s look at a side-by-side example of the difference between “novel style” writing and “screenplay” writing: 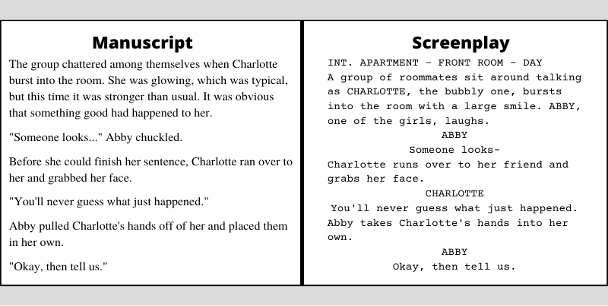 The most obvious difference between these two types of text is the formatting. For every scene in a screenplay that’s in either a different location or the same location but at a different time, there will be a heading at the top stating this (“INT. APARTMENT – FRONT ROOM – DAY”). This is called the ‘slug line’. This strange name is derived from newsroom speak where they call abbreviations, such as SCOTUS meaning Supreme Court of the United States, slugs. Slug lines are extremely important in the screenplay because it helps simplify to the readers about where the scene is taking place. It also helps separate the previous scene from the next. The second formatting difference is in the dialogue lines. As you can see in the manuscript, dialogue in books is separated by indenting the line to separate it from the action and quotation marks are used for what is being said. Similar to this, the screenplay also indents where there is dialogue, but quotation marks aren’t needed. Instead, a screenwriter will state the name of the character that is speaking before filling in the dialogue. Mo st screenwriting software will help you format the dialogue, automatically centering your text when you write a character name in caps. As you can see, the actual dialogue didn’t change at all between the two different mediums, proving my point that dialogue is where a screenwriter can be most creative. There isn’t much visual difference between the two mediums but try picking up the screenplay of a novel-turned-movie and see the difference.

Good screenwriting is a brief description of story with natural dialogue and the foundation used to communicate to filmmakers how the films we love to watch should be made. The screenplay is the blueprint on how to produce a movie, often times lacking permanence through production, so it must be written as such. A script speaks to the producers on how much money will have to be put into the project. A script speaks to the director on what the story they’re creating will be and gives a vision on what the set designer will build for photography. Without screenplays, movies would be an unorganized mess and simply end up never getting made. It’s okay that we don’t really think about scripts when we think of our favorite films, but we must acknowledge that without them, we wouldn’t have something to love.

Understanding Literacy in Our Lives by Natalie Vrobel is licensed under a Creative Commons Attribution-NonCommercial-NoDerivatives 4.0 International License, except where otherwise noted.