Most hobbies that people enjoy for day to day entertainment are at least in some way related to literacy or at least communication. Most hobbies that are meant for someone to enjoy on their own typically are oriented more towards reading. On the other hand, hobbies that are more oriented to be enjoyed with other people are obviously more focused towards communicating with others. Communication exists in a lot more hobbies than most people would expect. It almost always exists in any hobby, at least to some extent. In my experience, a hobby of mine that usually involves a lot of communication is playing video games with friends. In order to effectively play, each teammate will have to communicate with each other to win. I also from time to time play games that are single player that require more of a reading aspect to be enjoyed more. Put together all genres of games include all the aspects of literacy in some way.

The first type of video game I mentioned is the multiplayer games that involve a lot of communication. Not every multiplayer game needs the teammates to communicate with each other but as the risks and stakes of the game get higher and higher communication becomes more and more of a necessity to win. Games with higher stakes that I play such as Call of Duty Warzone can get pretty intense near the end of the game and communicating with teammates can often make the difference between winning and losing. When someone plays a game similar to warzone and cannot communicate with teammates, they often will not have any help from their teammates because they cannot ask for it. Players like this will only be able to use the extremely simple in game form of communication called pinging. Pinging is a very simple way to communicate with teammates but with it being so simple it lacks a way to tell teammates anything other than the location of either enemies or the location the team should move to. Pinging is a button one can press the puts a marker on the map that can either indicate a move or where enemies have been or still are so teammates that cannot speak are still able to have a small amount of communication. On the other hand, microphones allow players to communicate with each other much more effectively. With microphones players can give callouts to their teammates whenever they want without disrupting their gameplay or movement at all. Verbal communication is vastly superior to pinging in multiple ways. When verbally communicating a player can call out enemies constantly instead of having to repeatedly press the ping button as the enemies move to a different location. It is also much easier to callout different variables such as the gas circles moving in so teammates know they need to move away from it. When the game gets closer and closer to the end, giving verbal callouts to teammates becomes more and more vital. At the end of the game the circle in which all the remaining players are playing in is extremely small and quick communication is extremely important, in this phase of the game pinging things most likely will not suffice. In the end, if each teammate gives good, effective communication, the team might be able to pull off a victory. One specific example of this occurring was in a game of warzone I played with two friends of mine recently. After jumping from the plane at the start of the game we landed at a location many other players had also landed at. We would not have survived that initial landing if we had not communicated and told each other where we had seen enemies and where useful weapons were, as we searched the building separately. For the majority of that game, we stayed on the roof of the building we landed at in the beginning because the gas zone did not require us to leave yet. Since we stayed still, we sniped other people from the roof all while each of us called out the people we saw through our scopes to each other. Since our views were so zoomed in on distant locations it became even more important to do this because it would be much easier for one of us to be unable to see an enemy that was, for example, off to the side and out of our view. As the gas zone got smaller, we were forced to jump off of the rooftop and down to the street below. As this happened, however, we found out that another team had been hiding on the base floor of the building we were in the entire team and they started to shoot at us as we parachuted down to the street. Both of my teammates died from this, but we also managed to kill two of them before that happened. At that point it was only me and the one other enemy left in the game and through the communication of my teammates spectating me I was able to sneak through the other side of the building he was hiding in while being reminded by my teammates to check corners and doorways until I snuck up behind the enemy and defeated him to win the game. 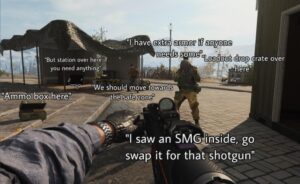 This image displays just some of the various examples of the way teammates in warzone need to communicate with each other. Telling a teammate about an ammunition box they may not have seen can make the difference between them defeating an enemy and running out of bullets when they need it the most. Similarly, telling teammates about the zone could be very helpful if they were not paying attention and didn’t see it coming. Any of these various ways teammates can communicate and many others are a very helpful way to potentially change the outcome of the game in your favor.

Alternatively, single player games are much more reliant on reading than on communication. Since there is no one to communicate with, obviously communication is not really a part of effectively playing single player games. An example of single player games that I play that require at least some reading is games from the Fallout series. These games are single player and have many instances around their open worlds of pieces of writing that can give the player useful information. This reading may not always be vital to success in the game, but it is still a higher level of reading and literacy than most games. These pieces of reading are usually not very intense levels of reading but give the game a more complex level of literacy and make the world feel more inhabited and alive. Often the reading takes the form of small notes and sometimes books. These notes usually give the player hints and clues about where to find extra money and gear to use in other aspects of the game. Other times the notes and books tell stories of non-player characters that exist to add story to the world. These stories usually give details of the struggle for survival in the post-apocalyptic world the game takes place in. Even small stories like that can be beneficial to the player because they can reveal secrets about things like safe combinations and secret locations. Whatever the type of reading, these small pieces of reading play a small part in increasing the literacy of the game.