Opioids are substances that interact with naturally occurring opioid receptors in the human body and are either derived from opium or synthetically constructed/manufactured. You may hear the words opioid and opiate being used interchangeably—this is not entirely correct. Opiates are a subset of opioids derived from opium—substances such as heroin, morphine, and codeine are produced from the seeds or what is extracted as a resin from the opium poppy. Many varieties of this plant do not produce opium in any significant amounts and are grown for ornamental purposes. A great deal of international economics, policy, policing, and trafficking are involved in opioid production and distribution.

Originally, opioids referred to synthetically or semi-synthetically produced substances. Semi-synthetic substances include opium to some extent but there are synthetic components involved, as well; for example, oxycodone and hydrocodone are semi-synthetic opioid drugs. Purely synthetic opioid examples include methadone, tramadol, fentanyl, and carfentanil. Opioids are manufactured both by licensed/controlled pharmaceutical companies in the U.S. and other countries, as well as illegally produced and distributed by uncontrolled clandestine laboratories around the world (https://www.cdc.gov/drugoverdose/data/fentanyl.html). The word opioid is now used to describe the whole group of substances that bind with opioid receptors in the brain and body, whether naturally or synthetically occurring. Hence, opiates are generally considered as a group of opioids these days.

Narcotics is another word you may have encountered. Narcotics are substances intended for use in treating moderate to severe pain. Examples of opioid pain medications are:

The word narcotic refers to the capacity for these drugs to induce a state of narcosis—a state of stupor or unconsciousness produced by narcotics or other substances (https://www.merriam-webster.com/dictionary/narcosis). The word narcotic is not much used in health or mental health professions anymore once it became so heavily associated with the legal system and illegal drug trafficking.

The medical use of opioids is to provide pain relief. Common types include prescription drugs like oxycodone, hydrocodone, codeine, morphine, and fentanyl, as well as combination medications (e.g., aspirin or acetaminophen plus opioid, such as Percodan®, Percocet®, or Tylox®). Prescription misuse of opioids generally involves pills which are either swallowed or crushed and injected or snorted. Some forms are meant to be absorbed through the skin in a controlled dose, such as the fentanyl patch, or to be administered intravenously (IV) under medical supervision.

Nonmedical use of opioid drugs may represent a gateway to heroin use: based on 2011 data, about 80% of individuals who used heroin misused prescription opioids first (NIDA, 2019). However, “more recent data suggest that heroin is frequently the first opioid people use. In a study of those entering treatment for opioid use disorder, approximately one-third reported heroin as the first opioid they used regularly to get high” (NIDA, 2019). It is also important to recognize that, in the 2011 data, about 4-6% of individuals who misuse prescription opioids transitioned to heroin: “This suggests that prescription opioid misuse is just one factor leading to heroin use” (NIDA, 2019).

Opioid medications are used medically for their ability to control pain (analgesic effects), as well as to reduce/control/suppress coughing and diarrhea. In addition to pain relief, opioids confer a general sense of well-being, relaxation/reduced tension, reduced anxiety, reduced aggression, and potentially a state of euphoria. Opioids also cause drowsiness, difficulty concentrating, apathy/lack of motivation, slowed physical activity/reactions, constricted pupils, constipation, nausea/vomiting, and slowed breathing (DEA, n.d.; NIDA, 2019). The psychoactive effects of opioids come from their bonding to naturally occurring opioid receptor sites on neurons, leading to a surging release of dopamine to the pleasure areas of the brain, blocking pain, and rewarding the substance use behavior. The surge in “pleasure” from exogenous opioid use is many times greater than naturally occurs at opioid receptor sites from endogenous sources, such as pleasure from eating or sex. Because the brain adapts to the presence of the extrinsically introduced opioids, tolerance occurs with repeated use and withdrawal symptoms appear when use is stopped. At this point, a person may take the drugs not so much to “get high” as to avoid or reduce the low or negative feelings that occur without the drug.

Opioids are powerfully psychoactive and addictive, with chronic use accompanied by the development of tolerance, as well as withdrawal symptoms: watery eyes, runny nose, yawning, sweating, restlessness, irritability, loss of appetite, nausea, tremors, increased heart rate, increased blood pressure, chills, flushing, drug craving, and severe depression (DEA, n.d.). Withdrawal symptoms generally disappear over days to weeks without additional dosing, depending on the type of substance involved and the severity of the physical/psychological addiction developed. The experience of craving and depression may persist much longer, contributing to a heightened risk of suicide during early recovery. Other than overdose risk, the greatest acute danger of opioid misuse is the effect of slowing (or stopping) a person’s breathing, an effect compounded by combining opioids with some other substances with this same effect (e.g., alcohol, barbiturates). Other opioid effects include sleepiness, confusion, possible pneumonia. Over time, opioid use/misuse can lead to insomnia and increased sensitivity to pain—despite being used to control pain, a person’s pain tolerance threshold may be lowered with chronic opioid use/misuse. Heroin use may also lead to liver and kidney disease (NIDA, 2018). 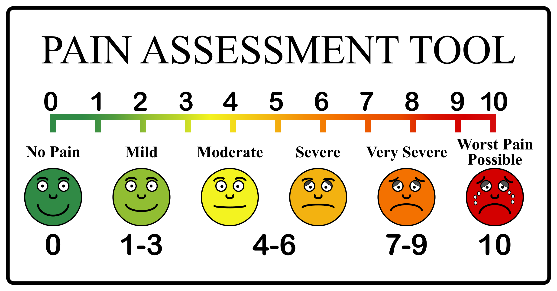 Physical dependence on opioids can develop even when used as medically prescribed; a person may become dependent on the class of substances, such that heroin and prescription misuse may become intertwined depending on a person’s access to the different substances. Heroin and other opioids are frequently combined with other substances to amplify their effects or to counter some of their side or withdrawal effects. Opioids like fentanyl or carfentanil may be added to heroin (or other substances) to amplify effects and increase drug trafficking profits (Taxel, 2019). Because these added substances are many times more potent than the primary substance, their addition greatly increases the risk of overdose.

Mode of administration. Depending on the mode of administration, opioid misuse may increase the risk of infection and infectious disease exposure. Since many individuals engage in injection use of these substances, this is of significant concern and worthy of harm reduction attention. Heroin (“horse,” “smack”) is generally injected, smoked, or sniffed/snorted. The avenue of administration can amplify the addictive potential of heroin or other opioids—the faster the drug reaches the brain in large concentration, the greater the addictive potential (i.e., injection is faster than oral drugs). The avenue of administration also may introduce additional risks, such as injection site infection, injection site vein collapse, and exposure to infectious diseases, such as HIV and hepatitis (Rassool, 2011).

Opioid overdose. The symptoms of a heroin overdose as described by Rassool (2011, p. 73), include:

Obviously, the risk of a dangerous or fatal overdose is tied to the amount of a substance used. However, amounts are relative depending on the potency/strength of the substance. Fentanyl is recognized as contributing to a significant surge in overdose events and deaths—pharmaceutical-grade fentanyl is 50 times stronger than the average potency of heroin (CDC, 2018). One reason it becomes even more dangerous is that it often is added to illegally distributed substances, like heroin (but also other types), without the knowledge of persons using them. The person is unknowingly delivered a more potent dose than accounted for, contributing to their overdose risk: increased opioid overdose death rates “are being driven by increases in fentanyl-involved overdose deaths, and the source of the fentanyl is more likely to be illicitly manufactured than pharmaceutical” (CDC, 2018). Dosing uncertainty is compounded by uncertainty as to the strength/concentration of illegally manufactured opioids, including fentanyl and its variants (analogs). While not as common an opioid problem as fentanyl, pharmaceutically produced carfentanil, intended for use in large animal veterinary care (e.g., elephants), has 100 times the potency of fentanyl (5,000 time the potency of heroin). This diagram visually shows these ratios.

Another contributor to overdose happens after a person has developed opioid tolerance and uses these substances at an increasingly higher level (dose) over time. Then, if the person ceases using the drug either as a result of treatment/recovery efforts, hospitalization, during a period of incarceration, or for some other reason (e.g., no access following a community-wide natural disaster disrupting distribution), tolerance reverts to a lower level (dose). Individuals unaware of this change in tolerance may resume use at their prior higher tolerance level, amounting to an overdose at their current lower tolerance level. This phenomenon is suspected as a contributor to relatively high mortality rates observed among formerly incarcerated individuals in the days immediately following release from jail or prison.

Of the 67,367 drug overdose deaths in the United State in 2018, nearly 70% were attributable to opioids (https://www.cdc.gov/drugoverdose/data/statedeaths.html). Though 1.1 percent of the global population (53.4 million persons) aged 15-64 years engaged in opiate and/or use of prescription opioids for non-medical purposes, the problem was greatest in North America with 4% of the population using opioids in the past year (UNODC, 2019).

While profoundly disturbing, deaths due to overdose are not the only statistics of concern regarding opioid misuse in the U.S. For example, neonatal withdrawal syndrome (NWS) rates in 2015 multiplied by 8 times the 2006 rate in Ohio (https://www.wcbe.org/post/rate-ohio-babies-born-addicted-drugs-increasing) and children’s services in Franklin County Ohio reported 70% of children under one year of age and 28% of all children in their custody had parents using opiates at the time of removal from the home (https://adamhfranklin.org/opiateactionplan/). Again in Franklin County Ohio, for every overdose death, there were 32 emergency department visits.

According to data from the 2018 National Survey on Drug Use and Health (NSDUH, 2018), over 3 million individuals aged 12 and over were estimated to engage in current (past month) opioid use outside of what was medically prescribed.

The following table presents statistics by age group for several pieces of information concerning non-prescription use of pain relievers (synthetic opioids) and heroin (estimated numbers across the U.S. and percent of population). Harm perception and lack of access are two important components in preventing substance misuse and the youngest group was least likely to perceive harm, although they were also the least likely to perceive having easy access.

The 2018 Monitoring the Future study reported the lowest rates for 12-graders’ past-year misuse of prescription opioids since 2004—about 3.4%, which represents a 64% decline (http://www.monitoringthefuture.org/pressreleases/18drugpr.pdf).

According to data from the 2015 NSDUH survey, most individuals (97.5%) prescribed opioid pain relievers did not misuse them (Hughes et al., 2016). Among individuals aged 12 and older who did misuse prescription opioids, according to 2013-2014 NSDUH data, their most common source was from a friend or relative for free; the second most common was from a single prescribing doctor (Lipari & Hughes, 2017; see the figure recreated from data presented in Lipari & Hughes, 2017). Recent initiates and those occasionally engaged in prescription pain reliever misuse were far more likely to report friend/relative for free as their source than individuals engaged in frequent use; the latter group was more likely than the others to report their source as one doctor or bought (either from friend/relative or drug dealer/stranger) (Lipari & Hughes, 2017). 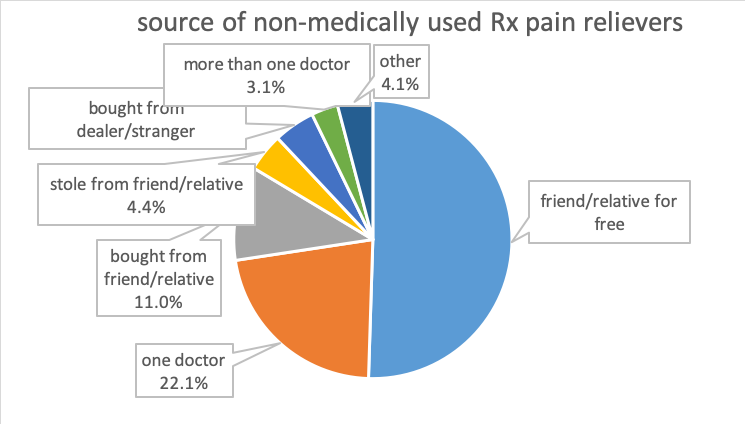 A variety of responses have potentially cut into the ease-of-access from prescribers (reporting systems, prescriber education), as well as family/friends (drug take-back programs, public education efforts).

NOTE: A portion of this chapter’s contents informed and were informed by materials presented in Begun (in press), NAS (2017), DEA (n.d.), and NIDA (2018). For more in-depth information, consider reviewing the Council on Social Work Education (CSWE) Learning Academy course America’s Opioid Crisis: A Primer for Social Work Educators and the review by Reber, Schlegel, Braswell, and Shepherd (in press), members of an interdisciplinary team serving children and families in the neonatal intensive care environment.