What Are Psychoactive Substances?

Psychoactive substances are chemicals affecting how the brain functions, and thus have the power to affect a person’s mind, mood, and behavior when consumed. The word psychotropic means the same thing. Many of these substances have important medicinal or other positive purposes when used appropriately. Many also are the subject of concern because of the consequences arising from their misuse and the potential for their use evolving into a substance use disorder. The wide range of psychoactive substances examined in this course include:

Epidemiological Studies. Epidemiology means to study the distribution and causes of disease.  Several large-scale epidemiological studies are routinely relied on to answer questions concerning prevalence and incidence rates and trends in the United States and around the world, as well as other social indicators. These include:

Scope of the Issue.

The World Drug Report 2019 (WHO, 2019) reported that not only are the adverse health consequences of drug use more severe and widespread than previously believed, the severity of the situation is increasing.

NSDUH data also reveals the differences between types of substances used and who engages in alcohol or other drug (AOD) use/misuse in the U.S. by age, gender, and racial/ethnic group.  Despite the emphasis on certain substances in the news and stereotypes stemming from various sources, the answers to these kinds of “what” and “who” questions are informative, and some answers my surprise you.

What is the most commonly used substance? In the U.S., alcohol. Not illicit drugs like marijuana and heroin and not prescription drug misuse. According to estimates based on the NSDUH data for 2017, more than 140 million individuals (51.7% of population) over the age of 12 used alcohol during the past month—meaning they are considered to be currently using alcohol (SAMHSA, 2018). Not all alcohol consumption occurred in risky or problematic amounts, however—the vast majority of individuals who consume alcohol do so in moderation. This is in contrast to individuals engaging in binge drinkingor heavy drinkingpatterns (see Figure 1.1). Binge alcohol use in the past month, defined as “five or more drinks (for males) or four or more drinks (for females) on the same occasion (i.e., at the same time or within a couple of hours of each other),” was attributed to 66.6 million individuals (24.5% of population); heavy alcohol use, defined as “binge drinking on the same occasion on each of 5 or more days in the past 30 days; all heavy alcohol users are also binge alcohol users”, to 16.7 million (6.1% of population) [SAMHSA, 2018, Tables 2.20A & 2.20B]. 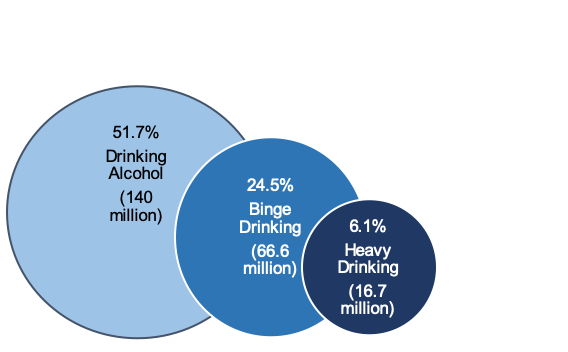 You may wonder about the difference in amounts for men and women presented in the binge drinking definition. According to the National Institute on Alcohol Abuse and Alcoholism (NIAAA), drinking in a manner that raises a person’s blood alcohol concentration (BAC) to 0.08g/dL or higher is binge drinking. Amounts and rates of alcohol consumption will be factors in this outcome, along with aspects of individual differences in constitution. In general, for women this means about four drinks in about two hours or five drinks in two hours for men. This pattern sometimes is referred to as risky single occasion drinking (RSOD).

The World Health Organization (WHO, 2014) identified alcohol as a significant factor in the global burden of disease (and death). The harmful use of alcoholwas defined as: “drinking that causes detrimental health and social consequences for the drinker, the people around the drinker and society at large, as well as the patterns of drinking that are associated with increased risk for adverse health outcomes” (p. 2). Thus, WHO set a goal for a 10% reduction in harmful use of alcohol by the year 2025 around the world because of the many health consequences (and 3 million deaths per year) attributed to this behavior (see Figure 1.2). Reducing and preventing alcohol-related harm is also one of the American Academy of Social Work and Social Welfare (AASWSW) Grand Challenges for Social Work under the umbrella goal called “Close the Health Gap” (Begun, Clapp, and the Alcohol Misuse Grand Challenge Collective, 2015).

Figure 1.2. Infographic produced by WHO (retrieved from https://www.who.int/images/default-source/departments/substances-abuse/alcohol/infographics/alcohol-3-million-death-every-year.png?sfvrsn=8062967_2) 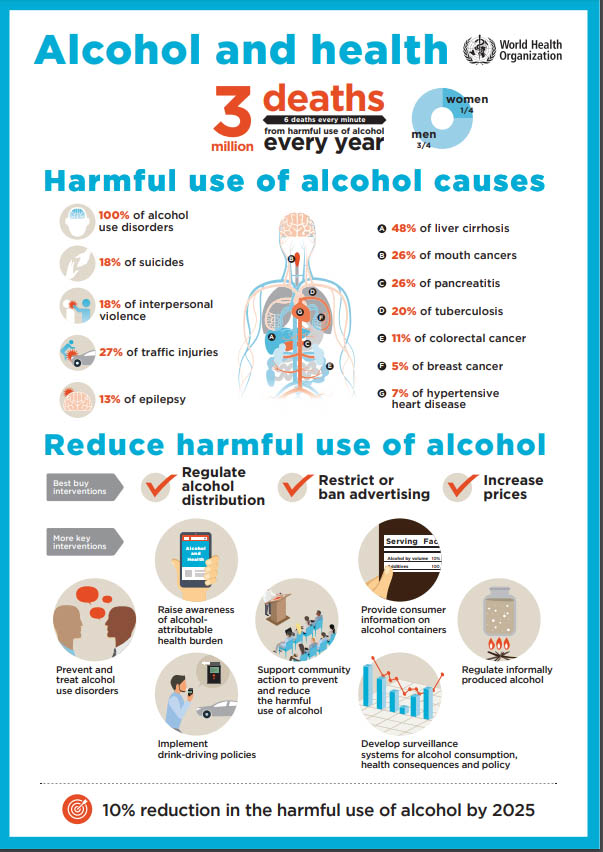 Type of Substance: Other Drugs.

We looked at data concerning alcohol in the AOD acronym, now let’s take a look at those other drugs. Over 30 million individuals (11.2% of the population) were estimated to have used illicit drugs in the past month based on 2017 NSDUH data (SAMHSA, 2018).

Comparing these percentages with what you just learned about alcohol, were you surprised that so much greater emphasis seems to be placed on drug problems than alcohol? You may find it curious that the FY 2016 National Institute on Drug Abuse (NIDA)budget for research and development was almost double the National Institute on Alcohol Abuse and Alcoholism (NIAAA) research and development budget; NIDA and NIAAA are two parts of the U.S. National Institutes of Health (NIH)(seehttps://officeofbudget.od.nih.gov/pdfs/FY18/Drug%20Control%20Programs.pdf). 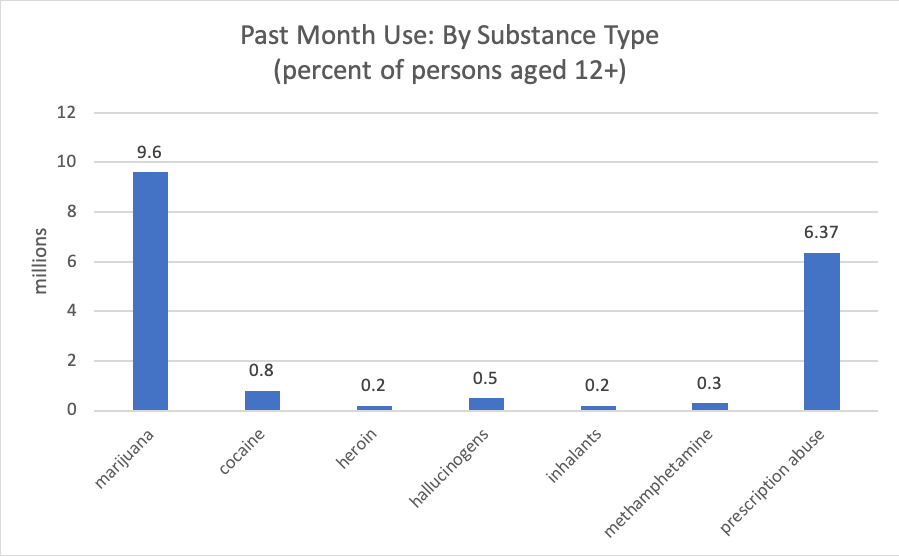 The World Drug Report 2019 contains a figure demonstrating the estimated global prevalence of drug use comparing cannabis, opioids, amphetamines/prescription stimulants, ecstasy, and cocaine. As in the U.S., cannabis is the drug most commonly used around the world (see Figure 1.4).

Type of Substance by Age Group.

Figure 1.5. Patterns of past month alcohol use by age group. 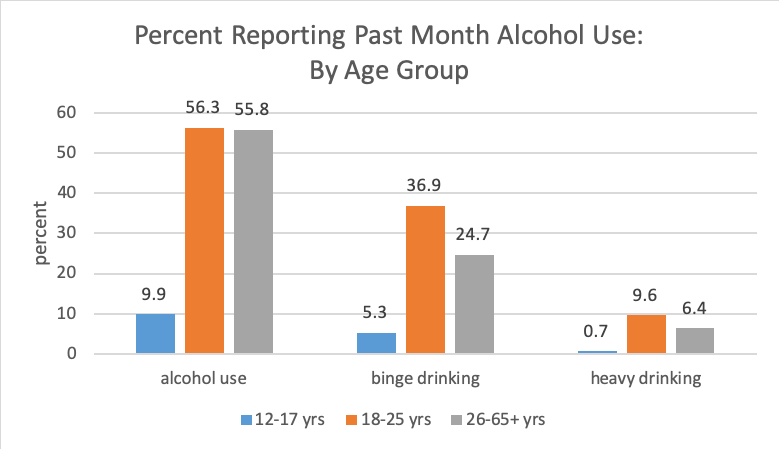 Figure 1.6. Patterns of past month illicit drug use by age group. 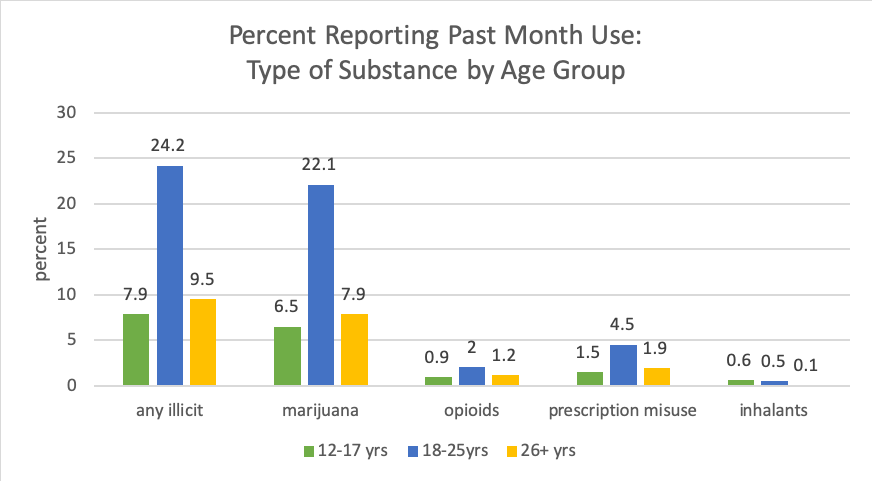 Substance Use by Gender:

Illicit drug and tobacco use were more common among men than women aged 12 and older; alcohol use patterns were very similar among men and women (see Figure 1.7).

Figure 1.7. Past month alcohol, illicit drug, and tobacco use by gender for persons aged 12+ years

Of considerable concern is evidence that, despite concentrated public health efforts, about 10% of women worldwide consume alcohol while pregnant (Popova, Rehm, & Shield, in press): prenatal alcohol exposure (PAE) potentially has lifelong effects on a person’s health, mental health, and abilities.

Type of Substance by Race/Ethnicity.

The seven U.S. racial/ethnic groups for whom information is reported in the 2017 NSDUH survey (SAMHSA, 2018 include: white; black/African American; Hispanic/Latino; Asian; American Indian/Native Alaskan; Native Hawaiian/Other Pacific Islander; and, those of two or more races.

The picture differs somewhat when looking at binge and heavy drinking patterns. 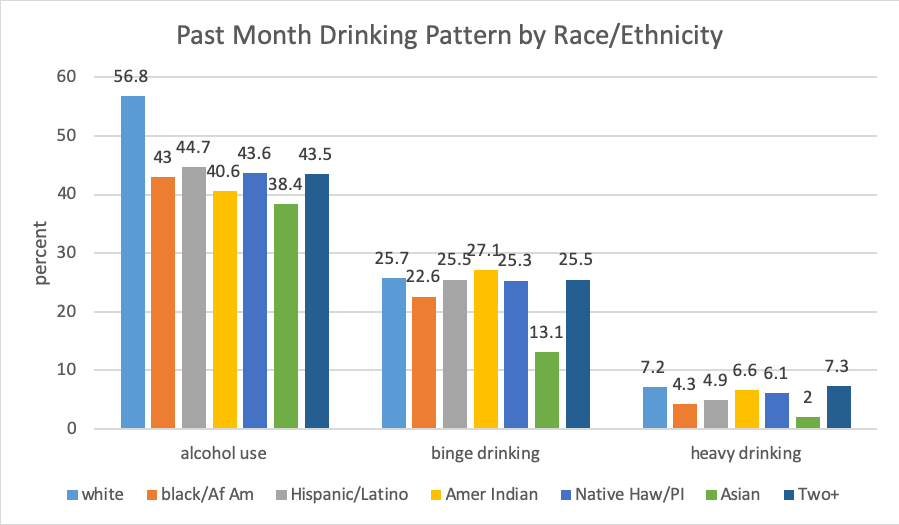 Figure 1.9. Past month illicit substance use by race/ethnicity