In the United States, a majority of individuals either do not drink alcohol (35%) or do so at low-risk levels (37%), however about 28% drink at levels placing them at risk for AUD or other serious health consequences (NIAAA, 2016). Here are recent facts and figures for your consideration, derived from the 2018 NSDUH survey data concerning individuals aged 12 and older in the U.S. (SAMHSA, 2019).

Past month alcohol use:

Past month binge alcohol use:

Past month heavy alcohol use:

In short, it seems a majority of individuals who currently drink alcohol do so within reason—less than binge or heavy drinking patterns. There existed notable variability in alcohol use behavior based on gender, age, and race/ethnicity reported among persons of legal drinking age (21 years) in the NSDUH 2018 data, as well (SAMHSA, 2019).

Among all 2018 NSDUH survey respondents, 3.9% perceived a need for specialized alcohol treatment during the past year; 1.6% made an effort to receive treatment (SAMHSA, 2019). The observed discrepancy between needing and seeking treatment persisted across age groups, with the perceived need more than doubling in each older age group.

Individuals who have a diagnosable substance use disorder most commonly have a problem with alcohol. From the 2017 NSDUH survey (SAMHSA, 2018), over 19.7 million individuals aged 12 or older (7.2% of population) were estimated to experience a substance use disorder (SUD) involving alcohol and/or and illicit drug use during the past year; the vast majority involved alcohol alone (5.3%) or in combination (0.9%) with illicit drugs (alcohol and other drugs, AOD), leaving 1% with an illicit drugs-only form of SUD. 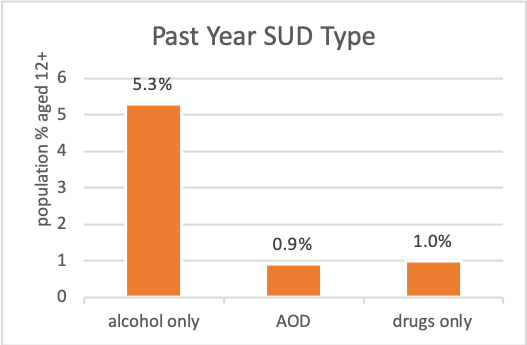 Is formal treatment necessary? This question is heavily debated in the literature and in practice: “Researchers and practitioners are only beginning to understand the nature and significance of change attempts that occur outside of formal treatment” (Begun, Berger, & Salm Ward, 2011, p. 105). A convincing body of evidence indicates that many individuals are able to successfully change their problematic drinking behavior without engaging in formal, specialized alcohol treatment—self-change attempts alone may suffice (Sobell, Cunningham, & Sobell, 1996; Sobell, Cunningham, Sobell, & Tonneato, 1993) or in conjunction with other informal and formal treatment interventions (DiClemente, 2006). Another convincing body of evidence concerns the effectiveness for many individuals of brief intervention delivered outside of specialized alcohol treatment programs (Zweben & West, 2020). These alternatives may suffice for individuals engaged in alcohol misuse without meeting diagnostic criteria for AUD or, perhaps, on the mild end of the continuum for an AUD.

The American Society of Addiction Medicine (ASAM) has established a set of guiding decision rules to help determine the appropriate level of care related to assessment of individuals in need of alcohol (or other substance) treatment intervention. The ASAM levels of care guidelines reflect a continuum of care options indicating increasing intensity in the levels of care on a scale (0-4):

Detoxification (detox) may be needed depending on the assessed need.

The goals of detox services are:

(1) safely manage the initial, acute withdrawal period (hours to days after ceasing alcohol use) and ensure the person is medically stabilized;

Recovery from alcohol use disorders, with or without formal treatment, may best be supported with appropriate case management or wrap-around supportive services (Zweben & West, 2020), as well as peer support and/or mutual help program participation (Bersamira, 2020; Zweben & West, 2020).