Here we introduce some basic principles of pharmacokinetics and psychopharmacology. Pharmacokinetics is the study of how drugs are distributed and metabolized (broken down) in the body—it represents a branch of pharmacology. We are concerned here with the patterns by which different substances are absorbed, metabolized, and excreted. The principles we examine in this chapter help explain overdose and differences in how quickly different substances begin to have an effect or how long the effects might last. Not only do certain drugs have an effect themselves, but so do their metabolites—the breakdown products—thereby extending the duration of the effects overall. Psychopharmacology is concerned with how different drugs have their effect on the brain. Our emphasis in this introduction to psychopharmacology concerns how different drugs might influence the actions of different neurotransmitters as agonists, antagonists, and synergistic effects. These actions have implications for medications that can be used to treat substance use disorders (pharmacotherapy).

Half-life. The duration of a drug’s effect is measured in terms of its pharmacological half-life which describes the relationship between the active dose circulating in the body (its concentration) and the variable of time. The first point where time matters is at the front end—from the time of administration, different drugs take a different amount of time to reach peak level. Then, as a drug is metabolized, there comes a point in time when its circulating concentration is half of what it was at its peak level. The time that it takes to achieve this point is what “distribution half-life” refers to.

This curve might help you visualize the relationship of half-lives and time for a hypothetical situation. The principles behind the curve are the same for every drug, it is the length of time for each half-life that differs—it could be minutes (e.g., some inhalants), hours, or even days. This also affects how long after using a substance it can still be detected in drug tests. Alcohol can be detected for 7-12 hours after drinking in a urine test (Moeller et al., 2017), or possibly longer depending on how much was consumed and several other factors. Marijuana can be detected in urine for about 3 days for some who uses it occasionally and for more than a month after last use by a person who uses it multiple times a day (Moeller et al., 2017). Opioid detection is possible in urine tests for 2-4 days for the most common forms, and this is about the range for detecting cocaine metabolites in urine, as well (Moeller et al., 2017). 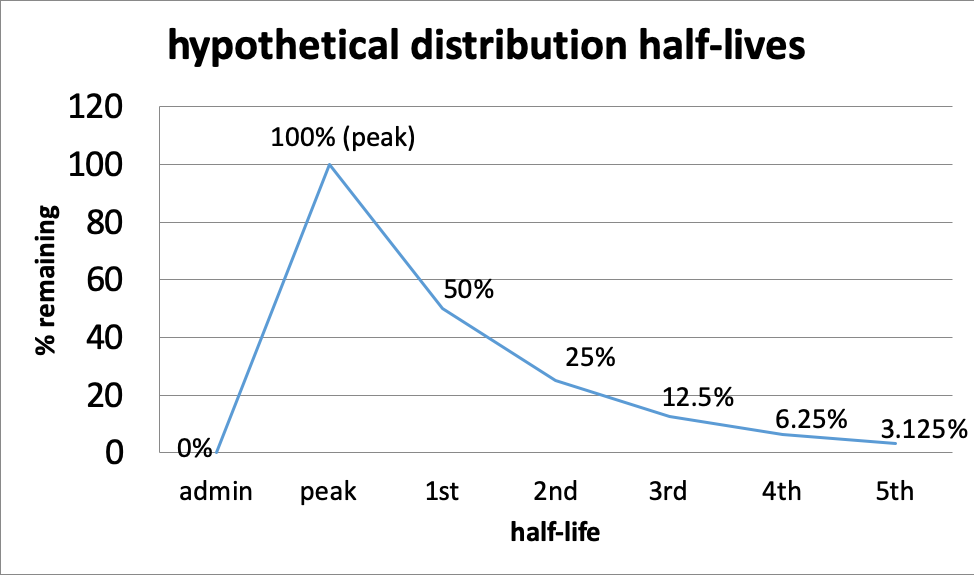 Different drugs, even within the same class of drugs, differ in terms of their half-lives as well as their range of effect—with medicine this would be called the therapeutic range. In other words, one drug might stop having an effect at the first half-life while another may still have an effect at the third half-life. For example, there is a big difference between “short-” and “long-” acting barbiturates and benzodiazepines. Urine tests can detect short-acting pentobarbital for 24 hours and long-acting phenobarbital for 3 weeks, although both are barbiturates; short-acting benzodiazepines (e.g., lorazepam) might be detectable in urine for 3 days, while long-acting benzodiazepines (e.g., diazepam) might be detected for 30 days (Moeller et al., 2017).

This curve shows the relationship of half-lives to dose effect. The distance between peak dose and overdose differs by drug—in some cases, there is very little “wiggle room,” making it very easy to end up with an overdose (the red line in the curve). This is true, for example, of barbiturates and benzodiazepines—the difference between therapeutic and overdose range can be quite narrow. As the dose of a drug increases, so do the risks of side effects, even below the overdose level.

In this hypothetical example, a person might need to take more of the drug at the point where 50% remains (first half-life) in order to maintain an effective dose, but it is going to be important to avoid a peak dose that takes that person into the overdose range. What is known about half-lives, effective dose range, and overdose range is based on averages across individuals—it may differ for a single individual and by various conditions (including the person’s overall health and presence of other drugs). Individuals differ somewhat in how they metabolize drugs. It also is based on drugs of known composition—produced under controlled pharmacy conditions. You can see why drugs manufactured in uncontrolled conditions (e.g., “meth” labs, foreign labs, homemade) can be so much more unpredictable. 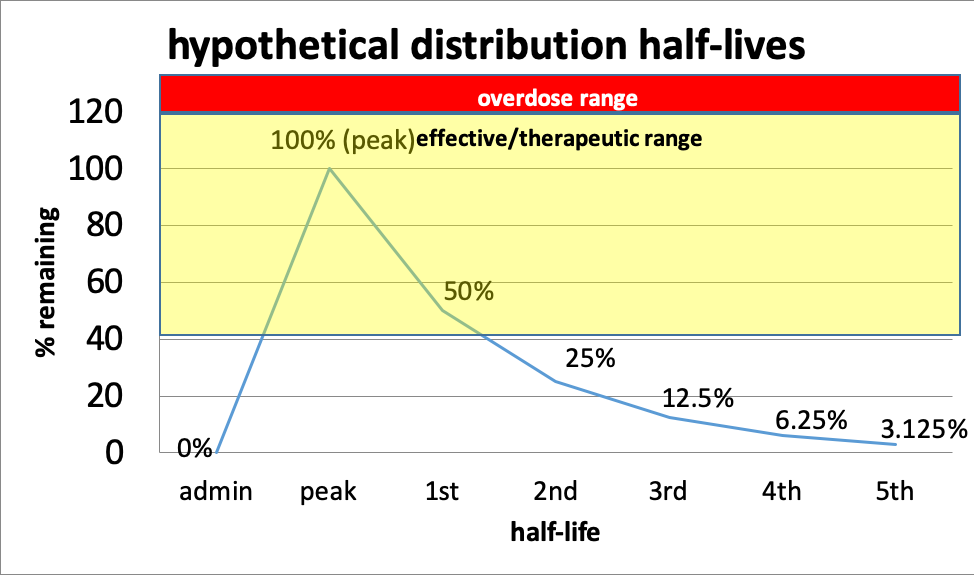 In this hypothetical example, consider that it took 1 hour for the drug to reach its peak level and that the half life is 3 hours long. That means at about 4 hours, the person will need to re-dose to maintain a therapeutic dose level or level where the effects remain in the desired range. If we are concerned about withdrawal symptoms, that is the point where the symptoms might begin to be experienced with this hypothetical drug. By about 16 hours, the person will have very little of the drug remaining in the body (5th half-life).

Metabolites. The breakdown process for many substances is not as simple as “there and gone.” In many cases, the process of metabolizing a drug or other substances happens in a sequence of steps, and the intermediary products may exert effects themselves. For example, alcohol (ethanol) is first metabolized (broken down) into another chemical called acetaldehyde. Acetaldehyde is toxic and thought to be responsible for many of the “hangover” symptoms associated with alcohol consumption, as well as with the increased risks for cancers. Fortunately, acetaldehyde does not stick around very long as it is metabolized into a less toxic chemical, acetate. Acetate is then metabolized into carbon dioxide and water. The enzymes responsible for the metabolism of ethanol into acetaldehyde (alcohol dehydrogenase, or ADH) and of acetaldehyde into acetate (aldehyde dehydrogenase, or ALDH) are both, to a large extent, under genetic control. This contributes to the observed phenotypic differences in individuals’ responses to drinking that we previously explored in discussing genetics—this is the mechanism through which genetics operate.

Agonists, antagonists, and synergism. While we have been looking at what happens when one or another substance is used, it is important to understand what happens when two or more substances are involved. This information helps inform strategies for medications used in pharmacotherapy—the use of medications to treat various forms of substance use disorder (including alcohol use disorder). As you may know from warnings on prescriptions you have taken, substances sometimes interact if they are in the body at the same time. Here is how they might influence one another.

Agonists. An agonist activates specific types of receptor sites in the brain or elsewhere in the body, causing a specific effect. For example, THC is a chemical in cannabis (marijuana) that activates the naturally occurring cannabinoid receptors in the brain. This is how it produces its psychoactive effect. This principle can be used in treating substance use disorders. For instance, a drug that activates the opioid receptors in the brain can reduce or eliminate withdrawal symptoms by acting like the substance that has ceased to be used. This is why methadone can help in the treatment of heroin/opioid use disorder—it acts enough like the heroin/opioid to help without the added risks and potential harms of using the original substance even if the person continues to experience a dependence on the class of substance involved. (Methadone itself is an addictive substance, but consistency in quality and dosing can be more carefully controlled and it can be more gently weaned over time to further reduce the likelihood of relapse.)

Antagonists. Like antagonists in a story (or superhero/villain comics), two substances may work against each other. Antagonists mostly work by blocking receptor sites in the brain so that a drug cannot trigger its expected response. For example, naloxone is used as an emergency first response to heroin/opioid overdose. This potentially life-saving medication blocks the effects of heroin or other opioids. In other words, naloxone is an opioid antagonist. This antagonist principle is used in developing some of the current medication treatments for alcohol use disorder and other substance use disorders.

Synergism. Certain substances, when combined, create a stronger or more prolonged response than either could alone. This is called synergism. For example, the combination of alcohol and barbiturates amplify the CNS depressant effect which is why it is easy to overdose on this combination. It takes less of either when taken together to achieve the same or greater/more prolonged effects as taking either substance alone—however, this goes for side-effects and overdose risk, as well.