Chapter 14.0: Inhalants, Steroids, Over the Counter and Prescription Medication Misuse

Any drug, whether over the counter (OTC) or prescription, is potentially dangerous if misused. All drugs have potential side effects. This is a common feature of both prescription and OTC drugs.

What Is OTC Misuse About?

OTC abuse is not as large on the public radar as the topics of prescription misuse and misuse of illicit drugs or alcohol. But OTC products can be just as problematic when misused. This means use beyond or outside of the recommended dosing and/or to experience psychoactive effects with the product alone or mixed with other products (NIDA, 2017b). OTC products may be  misused for psychoactive purposes or for other physical or mental health effects.

Decongestants. Until relatively recently, pseudoephedrine (e.g., Sudafed®) was easily purchased as an OTC for managing cold, flu, and allergy symptoms of nasal congestion. Since 2005, it has become more tightly controlled. Although these medications are still available without a prescription, they are no longer fully OTC products in the United States. Their status is as a behind-the-counter (BTC) medication which means that a person can purchase the substance without a prescription, but only through interacting with a pharmacist and only in small, designated amounts. The reason: pseudoephedrine can be used as an ingredient in the illegal manufacturing of methamphetamine. However, medications containing pseudoephedrine may abused on their own for other purposes: to promote weight loss or as a stimulant performance enhancer by athletes.

Cough Medicines. Dextromethorphan (DXM) is an ingredient commonly found in many OTC products intended as a cough suppressant. At recommended doses, DXM works on the part of the brain region that controls coughing. However, at extremely high doses (10-50 times the recommended), it becomes a psychotropic drug causing euphoria, sometimes referred to as “robotripping” or “skittling” (NIDA, 2017b). The effect is dissociative and/or hallucinogenic and also a depressant effect (NIDA, 2017b).  Thus, it may not be alcohol content in cough medicine that leads someone to abuse these products (many forms are alcohol free, including tablets and capsules); it may be about the DXM. These medications are often misused in combination with other substances, like alcohol or cannabis (NIDA, 2017b). DXM misuse is mostly by youth. One reason is that DXM is legal, easily accessible, and relatively inexpensive. Policies have been enacted in many areas requiring purchasers to provide proof that they are over 18 years of age in an effort to curtail adolescent misuse of DXM. Another reason that adolescents might engage in DXM misuse, rather some other substances, is that it may be easier to hide from parents who are unaware that it represents a form of substance misuse.

One hazard related to DXM misuse is the potential for acquiring the drug in a highly concentrated form meant for pharmacies to use; this “raw” or “pure” form may easily be taken in much higher doses than intended and usually comes from outside of the U.S. (thus, may not be quality controlled). The risks of DXM misuse include impaired judgment and mental function (thus, impaired driving and risky decisions about engaging in other high risk behaviors), irregular/rapid heart rate, increased blood pressure (increasing the risk of stroke), vomiting (with the risk of aspiration/choking), and coma or death from overdose.

Another hazard lies in using DXM along with other substances. and many formulations that contain DXM also contain other medications, too. For example, OTC cold/flu medications often contain acetaminophen, which can cause liver damage, heart attack, or stroke in overdose amounts. These formulations also may contain antihistamines and other substances intended to relieve cold/flu symptoms and that are dangerous at high doses. If a person is taking enough of the combination medications to “get high,” there may be enough of these other substances to cause irreversible or deadly damage.

Other OTC medications that are subject to abuse include weight loss aids and anti-diarrheal medication.

Weight Loss Aids, and Anti-diarrheal medication. One reason for misuse of drugs may be in an effort to suppress appetite or loose weight.  There exists a wide range of OTC stimulant products on the market, many with questionable levels of risk and benefit. Until recently banned, OTC products sold in the United States might have included ingredients like ephedrine, pseudoephedrine, ephedra, or phenylpropanolamine. Like other stimulants, these ingredients and others, like bitter orange and ma huang (acting like ephedra), can cause nervousness/anxiety, tremor, rapid/irregular heart rate, increased blood pressure, and stroke, as well as being potentially addictive (Cohen, 2013).

Anti-diarrheal medication. An OTC opioid medication, loperamide (e.g., Imodium®), has the effect of slowing down the lower GI track. It does not have psychoactive effects at recommended doses since it is designed not to enter the brain (NIDA, 2017b). However, consuming it in large quantity and/or combining it with other substances may cause psychoactive effects (NIDA, 2017b); combined with alcohol, the effect of both is amplified (https://www.addictioncenter.com/drugs/over-the-counter-drugs/loperamide-addiction-abuse/). It is unclear whether misuse of loperamide is common (NIDA, 2017b), but may have increased over the past decade in conjunction with the nation’s “opioid epidemic” (https://www.addictioncenter.com/drugs/over-the-counter-drugs/loperamide-addiction-abuse/).

What Is Prescription Drug Misuse About?

In other chapters we learned about prescription drugs that may be misused including opioids, CNS depressants (like benzodiazepine), amphetamines (like Ritalin® and Adderall®), and others. As cannabis becomes increasingly accepted for medicinal use, it too may become a subject of prescription misuse. In addition to taking a medication in a manner or dose other than prescribed, The National Institute on Drug Abuse (NIDA, 2018b) defines prescription drugs misuse as:

“…taking someone else’s prescription, even if for a legitimate medical complaint such as pain; or taking a medication to feel euphoria (i.e., to get high). The term nonmedical use of prescription drugs also refers to these categories of misuse.”

Polydrug Misuse The safety of combining prescription, OTC, and/or illicit substances is concerning and depends on the type of substances being combined–they may potentiate (heighten or enhance) each other’s effects and side-effects which increases overdose risks, or one may block the effectiveness of another leading either to a loss of therapeutic advantage of a medically prescribed treatment or a person taking higher doses than safe in order to achieve a desired effect.

“Multiple studies have revealed associations between prescription drug misuse and higher rates of cigarette smoking; heavy episodic drinking; and marijuana, cocaine, and other illicit drug use among U.S. adolescents, young adults, and college students” (NIDA, 2018b).

Data from the 2018 NSDUH survey (SAMHSA, 2019) indicate the following regarding past-month prescription drug misuse among individuals aged 12 and older:

The demographic breakdown of survey participants indicates that:

The Centers for Disease Control and Prevention (CDC) produced a report on deaths attributed to drug overdose in the U.S. during 2017 (CDC, 2018). While a great deal of public and policy attention has been directed to the 28,466 deaths reported from fentanyl and other synthetic narcotics (not including methadone), prescription opioids contributed to 17,029 deaths. This is compared to 15,482 deaths from heroin overdose or 13,942 from cocaine. Among the CNS depressants we have studied, benzodiazepines were responsible for 11,537 deaths. On the other hand, 5,269 deaths were from antidepressant overdose and 10,333 from psychostimulants (including methamphetamine). (Not depicted in this chart, note that over 33,000 deaths in 2015 were attributed to alcohol misuse; Lopez, 2016).

The next chart, produced from a 2018 CDC Wonder report and posted as a series of slides by NIDA (https://www.drugabuse.gov/related-topics/trends-statistics/overdose-death-rates), shows the rate of drug overdose deaths related specifically to prescription opioids from 1999 to 2017. Not only is the change in height of the bars (numbers of deaths in the thousands) showing a dramatic increase, the yellow line across the top dipping down since 2011 and the orange line curving upwards since 2014 show that these prescription opioid deaths increasingly often include other synthetic narcotics (like fentanyl). 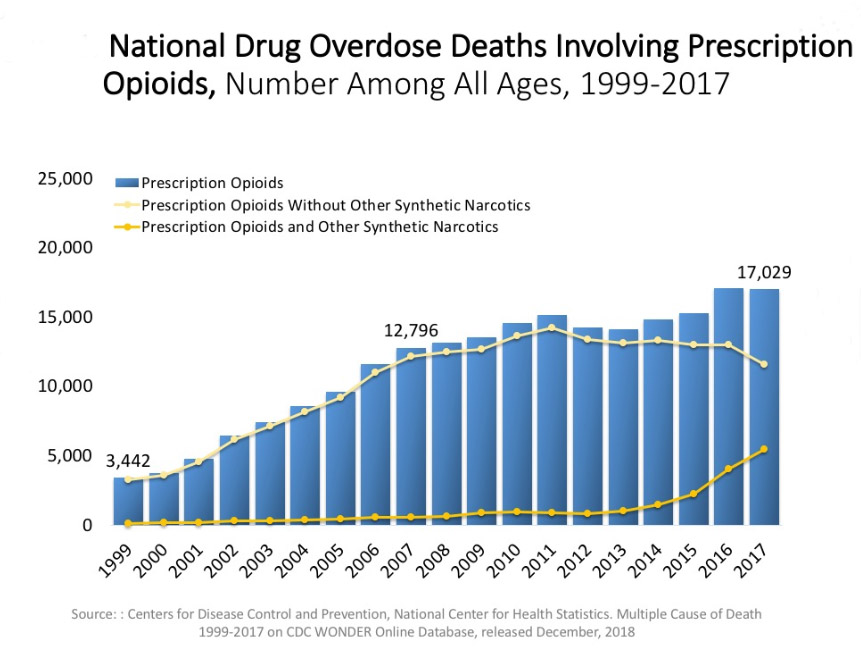 The trend in overdose deaths due to psychostimulants increased even more rapidly over the same time period (including methamphetamine deaths, not only prescription stimulants). The blue bars show the dramatic climb in deaths; the pale green line shows deaths due to psychostimulants alone, and the other two lines show the climb in deaths involving opioids or synthetic narcotics (like fentanyl) in combination with the stimulants. 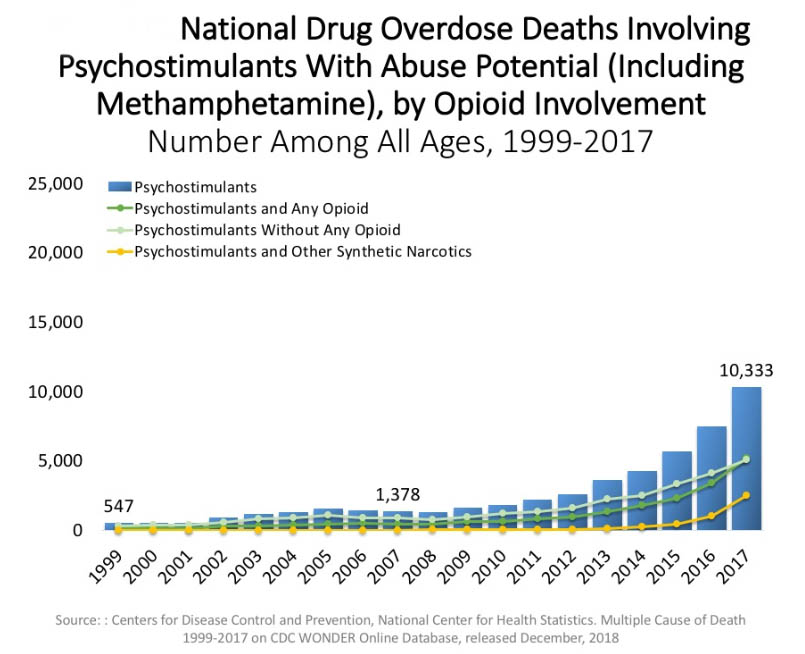 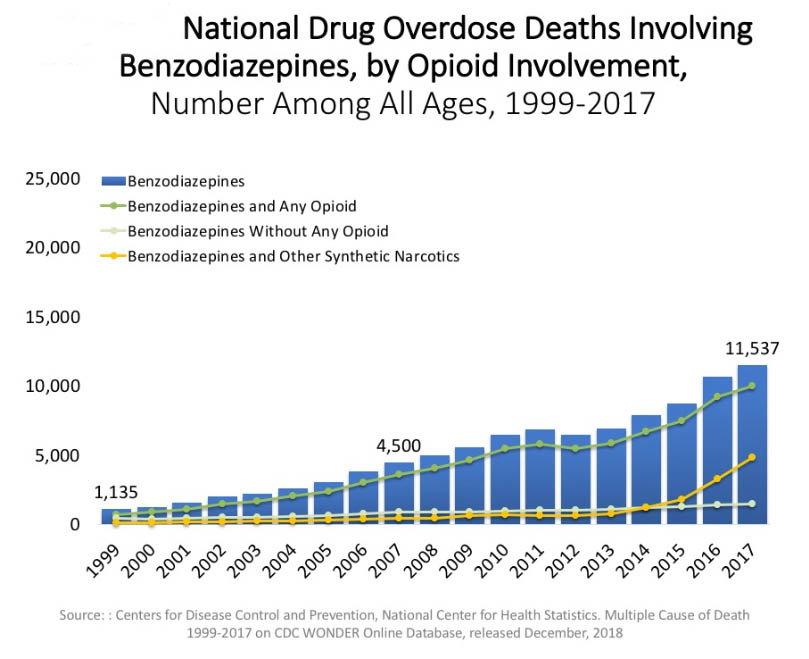 The data do not distinguish between accidental overdose death and suicide by overdose. A review of literature led to the conclusions that: (1) benzodiazepines promote both aggression and impulsivity among individuals who use or misuse them, (2) impulsivity and aggression are both mediators of suicide risk, and (3) there exists a distinct positive correlation, and probably a causal relationship, between prescribed benzodiazepine use and suicide risk (Dodds, 2017). The concern appeared both during the period in which these drugs were used and the period of withdrawal from benzodiazepine use.

The United Stated Department of Health and Human Services (HHS) produced a report in 2013 containing a list of recommendations for addressing the massive problem of prescription abuse in the United States. Here is a copy of their summarized findings (CDC, 2013):

Described more fully in Section III of the report, the opportunities listed above serve to strengthen programs and policies to reduce prescription drug abuse and overdose in the U.S. HHS has been at the forefront of the response to this serious public health issue and is committed to working with our federal, state, local governmental and non-governmental partners to further the actions included in this report.

You can see from this report that no single, simple solution or strategy will solve the problem of prescription drug misuse. The complex nature of the issues involved dictates applying complex, integrated strategies.

Take a few minutes to conduct a complete inventory of your household: