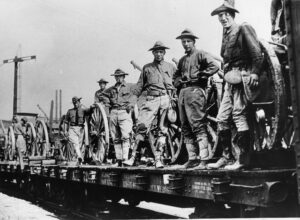 This is a photo of soldiers along with artillery being transported on a train in 1917 to go fight in World War 1. World War 1 was fought from 1914 to 1918 and was fought between two alliances, the Central Powers which included Germany, Austria-Hungary, and the Ottoman Empire, and the Triple Entente which comprised of Britain, France, Russia, and later the United States who entered the war in 1917.

Location of the photo is unknown, but it was taken at a train station that is possibly located in either the United States or Western Europe.

The name of the photographer is unknown, but the photo is credited to the Western Reserve Historical Society.

The hotspots add a little more info to the picture to better understand the picture and time period.

Here are a couple of sources to help historians better understand some of the things that have already been expanded upon in the photo. Information on the roles trains played during the war and soldiers uniforms of World War 1, along with the role artillery played in the war.

Browne, Alex. “Uniforms of World War One: The Clothing That Made the Men.” History Hit. History Hit, July 15, 2022. https://www.historyhit.com/uniforms-of-world-war-one-the-clothes-that-made-the-men/.