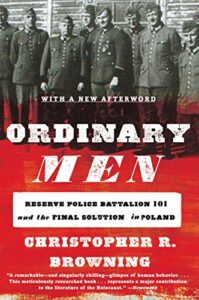 This book takes place in the country of Poland, which at the time, was occupied by Nazi Germany.

Citation for the Book

Christopher Browning is an American Historian who primarily focuses on the subject area of Nazi Germany. He has taught at various universities over the years, teaching mostly history courses dealing with his aforementioned subject era. He has written a few notable books regarding Nazi Germany and the Holocaust. These books include: Ordinary Men: Reserve Police Battalion 101 and the Final Solution in Poland (HarperCollins, 1992), The Origins of the Final Solution: The Evolution of Nazi Jewish Policy, September 1939–March 1942 (University of Nebraska Press, 2004), and Remembering Survival: Inside a Nazi Slave Labor Camp (W.W. Norton & Co., 2010).[1] The focus of this press release is his book Ordinary Men, which focuses on the German Reserve Police Battalion who were far too old to be in the German Army, but still ended up being responsible for many of the atrocities of the holocaust, intentionally or not.

Ordinary Men is a fascinating book that focuses on an overlooked aspect of the history of the holocaust. When we think about the holocaust and who is responsible for the mass genocide we often picture Adolf Hitler, his soldiers, and maybe even Josef Mengele, who was known as the angel of death. However, there was another group that was involved that is often overlooked, which is the German Police Battalion. These were often middle aged men who were too old to be enlisted into the army, and had very limited knowledge in Nazi ideology. These men were by every stretch of the imagination “ordinary”, yet they still are held partially responsible for the genocide that occurred. These men were under the command of one Major Whilhelm Trapp, who even offered up the deal that “If any of the older men among them did not feel up to the task that lay before him, he could step out.”[2] These men had very little clue what they were entering into, but those who did not except Trapp’s deal, soon realized the horrors that they were forced to commit. They were to round up and Jewish working men in the area and shoot all the women and children. These “Ordinary” men end up being hugely responsible for the capturing of Polish jews and sending them to the concentration camps in which they were tortured and slaved.

Browning, throughout most of this book, is looking at this time period through the lens of World & German history. In essence, he takes the timeline of events that took place and critically analyzes them to derive some meaning of how & why this group of men became responsible for our world’s most infamous genocide. He takes a particularly close look at what motivated these men. From themes of authority to propaganda, Browning offers up many different possible reasons for how these men ended up in the situation that they did. This is perhaps best portrayed when Browning explains how “A number of explanations have been invoked in the past to explain such behavior: wartime brutalization, racism, segmentation and routinization of the task, special selection of the perpetrators, careerism, obedience to orders, deference to authority, ideological indoctrination, and conformity. These factors are applicable in varying degrees, but none without qualification.”[3]. In essence, Browning is attempting, by examining these men through a historical lens, to explain how people who aren’t seemingly capable of such atrocities ended up responsible for them.

This book has been incredibly well received overall. Walter Reich from the New York Times calls the book “Finely Focused and Stunningly Powerful” while also summarizing the book as a whole to be a “penetrating searchlight on the human capacity for utmost evil and leaves us staring at his subject matter with the shock of knowledge and the lurking fear of self-recognition”[4]. Krikus Reviews stated that “It is the care with which Browning examines the evidence, as well as the soberness of his conclusions, that gives this work such power and impact”[5]. All in all, you will be extremely hard pressed to find anything negative said about this book. Critics nearly unanimously agree that this is one of the best pieces of historical writing concerning the holocaust.

This book has certainly paved the way for more authors to create historical writing on subjects often under-looked in the broader scope of history. Ordinary Men is ground breaking in that way, as it tackles a subject that, at least at the time of publication (1992), hadn’t been in public thought. Books such as The Five[6], written by Hallie Rubenhold, which details the untold stories of the women who were victims of Jack the Ripper, or Wake[7], written by Rebecca Hall, which details the untold stories of women led slave revolts, both explore topics that have been too often overlooked. Although neither book may have been directly influenced by Ordinary Men, it is certainly true that Ordinary Men, gave the pathway for these more contemporary novels to exist.