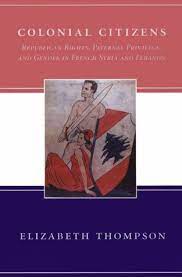 Elizabeth F. Thompson is a History Professor as well as the Mohamed S. Farsi Chair of Islamic Peace and Co-Chair of the Historical International Studies Research Cluster at American University. She has made a career out of studying the social movements in the Middle East and how gender and race relations have been impacted by foreign intervention and colonialism in the region. In this book, Professor Thompson utilizes archival research from American, French, and Syrian records along with  personal interviews she conducted with women from Damascus in order to unveil the stories of how the “civic order”, which is a complex relationship between the colonial power and the hierarchical colonial citizenship (the top of which stood wealthy Lebanese Christian men), was established by the French Mandate after the French came into the control of Lebanon and Syria in the years immediately proceeding World War I. She furthermore shows how that civic order was then passed on to the eventual leaders of these countries once independence was achieved. But, Thompson does this is a different way than historians have done this is the past which is by analyzing the role of women and gender relationships to analyze the effect of these mandates and to “to integrate the many levels of political experience that shaped the colonial order”.1

Thompson’s work chronicles the interwar period, the time between World War I and World War II. Beginning with the fall of the Ottoman Empire she traces the central issue of the book which she calls a “crisis of paternity” through the Syrian and Lebanese Independence in 1946. This “crisis of paternity” was the result of massive changes in gender roles in the aftermath of the First World War and the destabilization of males as the heads of households. Because of  the high level of deaths to the male population of this region as a result of the war, there was an emergence of the voice of women to demand their equality in a time and place where these issues were largely ignored although they began to bear the brunt of the responsibility in making sure their families were provided for. As Margaret Merriweather succinctly states, “These demands (by women for equal rights) generated great controversy and produced a backlash of intense ‘gender anxiety’. In the process of negotiating terms of citizenship with the French and among groups, males made bargains at the expense of women”.2 In short, the males of this region, in their struggle to attain rights for themselves, did so by creating a hierarchical system which placed their own women firmly at the bottom. This book chronicles the Syrian and Lebanese women’s struggle, through mass movement for suffrage, healthcare, education, labor unions and the like to take those rights denied to them by both the French and the men of Syria and Lebanon that they so justly deserved.

The reason this is such a pioneering work on the way historians view this period of Middle Eastern History is that Thompson puts women at the forefront of the narrative. By doing this she gives the reader a much more nuanced view of how interactions between colonizers and the colonized establish what she calls the civic order. She does this by highlighting the way that the paternalistic ideals of both the French and the male population of Syria and Lebanon and the men’s need to regain their security as the leaders of their society, was challenged by women in their uses of mass movements for suffrage, religious reform movements, better education, and striving for equality with labor movements.

The biggest critique I have of this book is that I feel like she lets the French, the colonizers, off too easily. At points it feels as if they are just another factor in these women’s struggle for their own agency and equality. Of course, the men of the region who made the bargains to ensure their own security in themselves and as citizens at the expense of the women, I do not feel like the she properly addressed the fact that the pressure levied by the French colonial power was as massive of a contributing factor.

Elizabeth Thompson’s work had a large impact on the way this period of Middle Eastern History and Women’s History. She has exposes the idea that in some places like the Middle East and in histories from all over the world, that women have stood by and played little to no role in the affairs of the formation of their respective societies is an invariably false claim. With this book, she clearly shows that the history of the Middle East, and in all places, cannot be fully told without mention of the massive and important effect that women have made on the history and current state of the region and the world as a whole.