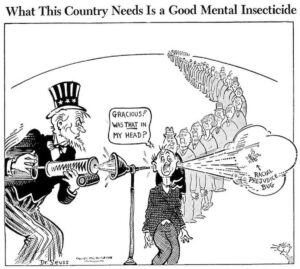 This political cartoon was made on June 11th 1942. This political cartoon contains Uncle Sam using an air pump to blow the “racial prejudice bug” out of an Americans head. In 1942, racial prejudice was in full swing. It wouldn’t be until 1965, more than 20 years later, when the Civil Rights Act of 1964 was passed when some semblance of acceptance began to emerge. The Cartoon also shows a long line of Americans, symbolizing that this is a widespread issue.

This Cartoon was created by Theodor Seuss Geisel, A.K.A. Dr. Seuss, who was well known for his children’s books and rather uncouth political cartoons.

Dr. Seuss lived in a few places during his life, Massachusetts and California to name 2 of them. When this cartoon was drawn, he lived in New York City.

To learn more about Dr. Seuss, reading his biography, or going to the The Amazing World of Dr. Seuss Museum in Springfield, Massachusetts.

To learn more about Dr. Seuss and his political cartoons, use these helpful links!