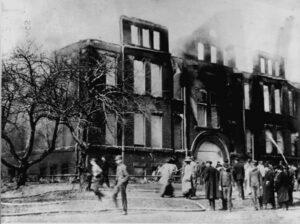 This is a photo taken by an unnamed photographer on March 4, 1908, during the Collinwood School fire. The fire took the lives of 175 individuals. This photo was taken during the fire as survivors and rescuers stand outside the school attempting to put out the flames.

This Photo does not have a named creator but was donated to the Cleveland Memory by Joeseph E. Cole.

There are plenty of sources that could help better understand what is happening in the photo. Scholarly sources giving reports of the disaster hold information needed to contextualize the photo. Newspapers as well of the time explain the event when it happened giving a more personal account on how people reacted to the disaster.