Effects of Slavery: Impact of Ancient Slavery and Modern Ideology 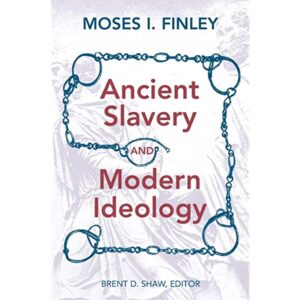 Classical Scholar Moses I. Finley spent decades studying the historical economic issues of Europe and has learned how to apply that knowledge and the ways that these European nations handled slavery and other economic policies into the modern world. Finley has written 19 books and some extremely popular ones that include The Ancient Economy and The World of Odysseus. The social history is quite clear, Finley talks about how the relationship between Greek and Roman slavery can be tied to the creation of Marxism, “which is a social, political, and economic theory originated by Karl Marx that focuses on the struggle between capitalists and the working class.”

Ancient Slavery and Modern Ideology offer advice on the conversation of slavery. The discussion between American and Latin slavery gets intense according to Finley, and the discussion on the ethics, morals and historical meaning moves away from academic to intense. He goes on to mention Greek and Roman slavery is significantly less important to modern ideology but there is a more advanced and academic discussion. After talking historically and theologically Finley writes that there is an issue with more modern slavery. These new Christian nations, according to the New Testament call slavery evil, but these Christian states still rely on slavery as a system.

Finley uses many methods to convey his argument, one of the most interesting topics he uses is also an engaging one and that is to expose and invalidate historical instances. He also called out other historians which led to an intriguing read, and one of those historians is Joseph Vogt who was a 20th-century German classical historian that studied Roman history. Finley goes on to write that Vogt’s writings on the Christian nation’s acceptance of slavery are “uncritical” because of the failure to go deeper into the community that was formed by slaves and masters.

Finley does take a couple of risks when he writes Ancient Slavery and Modern Ideology, some of which are trying to link German Marxism to Greek and Roman slavery. While all of history is somehow tied and connected, trying to reason with the 19th-century economic policy that was heavily affected by slavery that happened thousands of years ago is really complex and sometimes can be rejected immediately because of the difference in time.

Finley left many questions on what is to be thought to be as normal historiography. Finley always had questions and proposed them in this text. Finley challenged the idea that other historians just assumed Christians were bad people because they used slave labor. For example, admitting the New Testament was correct on their end but pointed to Roman Law that there were circumstances in which people were allowed to have and own slaves.

Team, The Investopedia. “Marxism: What It Is and Comparison to Communism, Socialism, and Capitalism.” Investopedia. Investopedia, November 21, 2022. https://www.investopedia.com/terms/m/marxism.asp#:~:text=Marxism%20is%20a%20social%2C%20political%2C%20and%20economic%20theory%20originated%20by,would%20inevitably%20create%20class%20conflict.