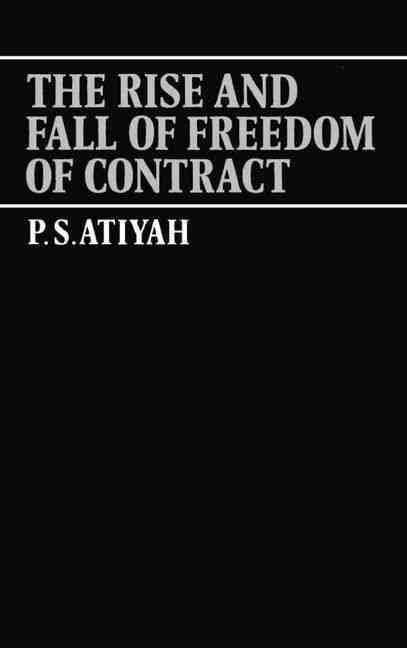 Patrick Atiyah examines in minute detail the elements of what is a contract in Anglo-Saxon law, why it arose, and what it means to everyday people. Throughout the book, Atiyah examines different portions of British society, how contract law affected them, and how they in turn affected contract law.

The book is broadly divided into 3 parts (the rise of contracts, the rise of freedom of contract, and the fall). Each part has a chapter devoted to the social, intellectual, and legal history of the development of contract law. Special emphasis is placed on how we define a contract and what rules we utilized to enforce them. What is a promise, can a contract be read with material outside itself? What factors let a person off the hook from their contractual obligations?

Essentially the book states that 18th-century British society was largely a collection of wealthy aristocrats using the law to enforce the status quo of property rights.1 They made rules for the game (of life and business) and had those rules enforced. Contrary to modern thought, a contract was seen as evidence of an existing promise, rather than a promise in and of itself.2 Contracts could be considered incorrect in their assertion of promise. Mutual rights and obligations were seen more from an evolution of medieval reciprocity.3 Courts were very interested in the fairness of a given exchange. The courts often intervened and invalidated contracts where they considered that bargaining power was unequal.4 In one case, returning sailors sold their shares in prize booty of their own free will, yet the courts paternalistically declared the contracts invalid.5 Again, since a contract is merely seen as evidence, courts could also prescribe contractual relationships without the explicit agreement of the parties.6 A “Golden Age” of contractual freedom then occurs in the 19th century. Ideas about individuality and Caveat Emptor predominate intellectual discussion.7 Though the “fall” takes place as the growth of legislative intervention increased the requirements to make a contract valid throughout the 20th century. For instance, a business today is under obligations to pay a minimum wage, provide minimum benefits, and follow several environmental/ workplace requirements to legally conduct business. A statute of Fraud is essential to determine what kinds of relationships need to have a written contract.

Atiyah’s final chapters contend with where British contract law is in the 1970s. One that has the forms and procedures of the peak of freedom of contract, but one whose materials are increasingly subjugated to the ideas of detrimental reliance and state intervention. Atiyah ends the book with the idea that some new theory of contract law must emerge to find a sensible synthesis of reliance-based and promise-based liabilities.7

The methodology of the book is largely based on the creation of the society of Great Britain at a given time using primary sources for setting the scene supplemented by other historical works. Extensive quotation is made of legal decisions from the given era under discussion. Looking back upon the whole, Atiyhah writes how such opinions and factors are part of a long line of development that contract law took. Both how the existing situation of contract law affected everyone in the United Kingdom, how they navigated said circumstances, and how the collective thinking led to changes in the legal doctrine of Contract Law. Extensive use is made of quantitative data to demonstrate changes in the situation of the UK, such as tax receipts, parliamentary debates, and landmark judicial cases.

Atiyah always tries to keep the focus on a handful of ideas throughout British society. What does it mean to have free will? Are actions that occur only by economic necessity still to be considered voluntary?

One critique of any history that seeks to re-create the thoughts and feelings of the people will always be…did the historian do it correctly? Are the sources varied enough and taken in their proper context?

One problem condensing down legal doctrine before the 1800s is that the role of the jury was wider than in contemporary times. In today’s legal world (in common law countries) the judge is the trier of law while the jury is the trier of fact. Before 1800, juries held far more power to determine and interpret the law. In est, they did not only decide if a given set of facts met the criteria of a law, but also could interpret that law itself. Juries did not write opinions to defend their position, thus a great deal of legal thought went unwritten. Thus by his reliance on written legal decisions, Atiyah misses many developments.8

The book’s impact on the wider field of history is not as great as its effects on the historiography of legal history. The books focus on the transformation of the law over time and gives an understanding of how private relationships existed in British legal systems, how modern developments have altered that relationship, and what questions are left unanswered (at least at the time of the writing).

3-Ibid., Another factor was a lack of distinction between Tort and Contract Law. One man’s damaging negligence to another created a contractual obligation in the older Common Law.