Riot: Analysis of a primary source 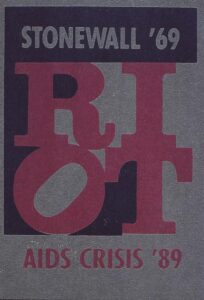 This is a silkscreen taken of a crack-and-peel sticker that was made in response to the AIDS crisis. The significance of this sticker is that it points out the twentieth anniversary of the Stonewall Riot and connects it to the AIDS crisis as a way to inspire people to act.

Gran Fury is credited for the image and is most likely the original artist or had direct influence on it due to his collection of advertisements and posters created during the AIDS crisis in favor of educating the public on the truth about AIDS.

The United States, most likely New York City. Although the Stonewall Riots had a significant impact all across queer spaces in the U.S..

Only a couple of years after the date mentioned on the sticker the ACT UP protest begin, which were a substantial impact on getting the government to act and provide care to AIDS victims. Gran Fury was one of the leading activist artist during this time creating multiple pieces still known today. To find more information on the AIDS crisis, ACT UP protest, Gran Fury, or any other facts related to the aforementioned topics there are documentaries such as “United in Anger”, books “AIDS: Making of a Chronic Disease”, “Let the Record Show”, and “Moving Politics”.  Along with those sources it is important to look into Stonewall as well just due to the impact it had on the queer community. Books such as “The Stonewall Riots”, or “The Stonewall Reader” are available to look at.