A World Unto Their Own – Slave Societies in the Antebellum South 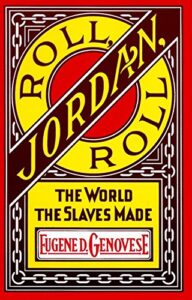 Eugene D. Genovese was an innovative, yet controversial historian, who’s research and writing focused on the American South during the Antebellum and Civil War period from 1800 to the beginning of the Civil War in 1861.  During his early career, Genovese was a self- described Marxist and Socialist who described “Southern slavocracy as a reactionary, ‘seigneurial’ challenge to 19th century Capitalism.” [1] [2] Genovese combines African-American history, social and cultural history, and the significance of religion, in the day to day life of southern slaves, in an effort to set a new “agenda for antebellum southern historiography.” [3]  First published in 1974, Roll, Jordan, Roll, is a transformative look into the relationship between Southern slave owners and slaves, and the life’s slaves created for themselves, while trying to survive the harsh treatment and degrading circumstances they lived under.

In writing Roll, Jordan, Roll, Genovese used his background as a Marxist and Socialist, combined with his “previous work {which} established his own hegemony over critical segments of the historiography of slavery,” [4] and extensive research into the personal manuscripts of former slaves and slave owners, to form a paternalistic frame-work in the relationship between slaves owners and slaves. [5] Genovese’s research and analysis focus on the day to day lives of slaves, and the social constructs of slave society.  He compares and contrasts the lives of house servants and field workers on the plantation, and the differences in treatment each group received from slave owners.  Roll, Jordan, Roll is divided into four parts, or “Books” [6), with each part focusing on a different aspect of slave society.  The importance of religion in slave society is stressed throughout the book, as each “Book”, and some sub-chapters, are titled with Christian references.

Perhaps the most important takeaway from Roll, Jordan, Roll, is how Genovese highlights paternalism [7] as the most important and significant cultural and social force at work throughout the book.  In analyzing the paternalistic relationship of slavery in the southern states, Genovese argues that paternalism in the South, as opposed to other slave holding nations in history, was unique in that Southern “paternalism was reinforced by the close living of masters and slaves {and} was enormously reinforced by the closing of the African slave trade, which compelled masters to pay greater attention to the reproduction of their labor force.” [8] The relationship between slave and slave owner was complex.  Through his research, Genovese, as historian David Brion Davis argues, shows that “the slaves were never the passive, receptive instruments their masters wanted them to be” [9] and in fact “slaves interpreted paternalism on their own terms and succeeded in redefining the limits of their masters power.” [10] Through his focus on paternalism, as Manisha Sinha, who’s research focuses on Abolition and Civil War history, as well as the transnational histories of slavery, Genovese sought to “understand the lives, community, family, culture, and religion of the slaves” [11]

Genovese, instead of relying on traditional historical methods, analyzed slavery and the relationship between slaves and slave owners from a completely different perspective.  Applying his Marxist background, prior research into the antebellum South, his analysis of surviving manuscripts of slave and slave owners alike, and then focusing his argument through the lens of paternalism, Genovese provides a thorough examination of slave society in the United States.  Roll, Jordan, Roll won the distinguished Bancroft Award for History from Columbia University in 1975.  Genovese’s work was heralded by some as groundbreaking analysis of slavery in the United States.  Historian J. William Harris argued that Roll, Jordan Roll “stood out…because of its use of Gramsci’s theory of of cultural hegemony, [12] and Genovese’s adaptation of that theory to elaborate a paternalistic interpretation of the master-slave relationship.” [13] However, Genovese has been criticized that he “openly admired various facets of slave-holders paternalism,” [14] and was “accused of playing down the truth that by definition, slavery demonstrated the cruelest form of racism.” [15] Others criticize that later in life, as Genovese gradually moved away from his far left communist stances, and his personal views gradually moved to right, eventually becoming more conservative and in fact converting to Catholicism, that this undermined his earlier political ideological thinking.

While applying paternalism towards slave holding societies was not a new concept, the way in which Genovese combines the paternalistic nature of the slave/slave owner relationship with Marxist ideology, while also incorporating cultural history, slave social constructs, and the importance of religion into the every day lives of slaves, Roll, Jordan, Roll changed the way in which African-American, Civil War, and Early American historians conceptualized the slave/slave owner relationship.  Using this process, Genovese was critical of historians who heavily relied on “social science methods that produced static, ahistorical, and antiquarian histories.” [16] The culture slaves constructed during their oppression at the hands of white slave owners, by using the limited means at their disposal, to survive and to make sense of their captivity, led southern slaves to build a world unto their own.

[2] For more information on the seigneurial system of land distribution, please refer to this video: https://www.youtube.com/watch?v=lWh8laa8TIw

[7] For a further description, definition, and discussion on paternalism, please visit  https://plato.stanford.edu/entries/paternalism/